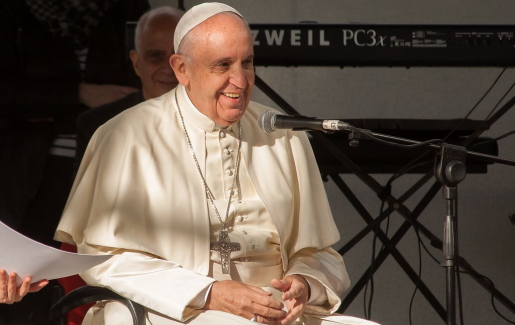 There are so many deserts in the cities, so many deserts in the lives of people who have no future, because there’s always – and I underscore a word that you spoke about here – always there is prejudice and fear. And these people must live and die in the desert, in the city. You do the miracle with your work of changing the desert into a forest: carry on with what you are doing! But what is your work plan? I don’t know. You get close and see what you can do. And this is life! You take life as it comes, like the goal keeper in football: he catches the ball from wherever it’s thrown.  . . from here, from there. . . You aren’t afraid of life, afraid of conflict. Somebody once told me – I don’t know if it’s true, I haven’t verified it . . .  if somebody wants to verify it they can – that the word “conflict” in Chinese is written with two signs: one sign that means ‘risk’, and another sign that means ‘opportunity’. Conflict, it’s true, is a risk but it’s also an opportunity.

We can take conflict as something we should stay away from: ‘No, there’s conflict there. I’ll stay away from it.’ We Christians know well what the Levite did, what the priest did, with the poor man who fell on the road. They crossed the street so they wouldn’t see, so they wouldn’t be close to him (see Lk. 10:30-37). Those who don’t risk can never get close to the reality, to know the reality. But even to know with the heart, it’s also necessary to get close. And to get close is a risk, but also an opportunity for me and for the person I get close to; for me and for the community I get close to. I’m referring to the testimonies you have given; for instance, in the prisons and with all your work. Conflict. Never, never turn away in order not to see a conflict. Conflicts have to be assumed, evils have to be assumed to resolve them.

That Psalm of the People of Israel when they were in prison in Babylon makes me think so much: ‘We cannot sing our songs, because we are in a foreign land’. They had instruments there with them, but they didn’t have any joy because they were hostages in a foreign land. But when they were liberated, the Psalm says, ‘we couldn’t believe it, our mouths were filled with smiles and laughter’ (see Psalm 137). This is how it is in this passage from the desert to the forest, to life, there’s a smile.

I give you a task to do ‘at home’. One day, look at people’s faces when you go along the street: they’re worried, everyone is closed in on himself. The smile isn’t there, the tenderness isn’t there. In other words, social friendships, social friendship isn’t there. Where there’s no social friendship there’s always hatred, war. Look at the geographic map of the world and you’ll see this. Instead, social friendship that most often has to be made with forgiveness – the first word – with forgiveness. Most often it is made by getting close: I’ll get close to that problem, to that conflict, to that difficulty as we have just heard these courageous teenagers do in the places where there is gambling and so many people lose everything there, everything, everything. I’ve seen elderly women in Buenos Aires going to the bank to receive their pensions and immediately to the casino! Get close to the place of conflict. And these youngsters go, they approach, they get close.

And there’s another thing that has to do with play, with sport and also with art. It’s gratuitousness. Social friendship is made in gratuitousness, and this wisdom of gratuitousness is learnt: it’s learnt through play, through sport, through art, through the joy of being together, of getting close. And this word, gratuitousness, is a word that must never be forgotten in this world in which it seems that if you don’t pay you can’t live, in which it seems that the man and the woman that God created precisely to be at the centre of the world, to be also at the centre of the economy, has been thrown out and we have at the centre a lovely god, the god of money. Now the god of money is at the centre of the world, and those who can draw near to adore this god, they draw near. . . and those who can’t end in hunger, disease, exploitation. . . Just think of the exploited children and young people.

Gratuitousness is the key word, gratuitousness that leads me to give my life as it is, I go with others and make this desert become a forest. Gratuitousness, this is something beautiful! And forgiveness, forgiveness also, because with forgiveness rancour, resentment goes away. And then building up, always building up and never destroying.

So these are the things that come into my mind. And how are you doing this? Simply in the awareness that we all have something in common, we’re all human. And within this humanity we get close to one another, to work together. ‘But I belong to this religion, of that religion. . .’ It doesn’t matter! Everyone steps up to work together. Respect one another, respect one another! And so we’ll see this miracle: the miracle of a desert that becomes a forest.

Thank you so much for all that you do! Thank you.”

Pope Francis at the Mariapolis 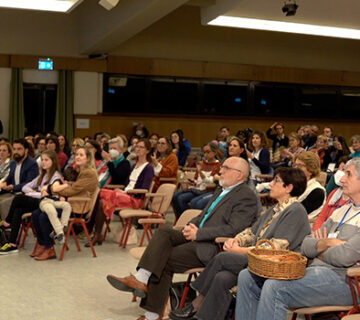 Pope Francis to the Focolare Movement : “May Christ always enlighten your steps.” 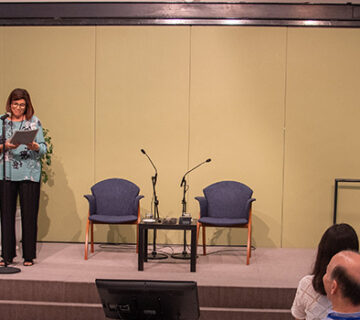 The meeting of those responsible for the Focolare Movement has opened with a message from Pope Francis.

Turkey: Prophetic unity for the care of creation