With the young people in Prague 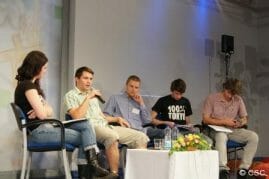 “In 2007 I was diagnosed with leukemia. At first it I reacted well to the news, but in a second moment I was fearful of dying. The support I received from the youth of the Movement, the Gen, which was expressed in so many ways, through sms, emails, and visits was important.

During the third cycle of chemotherapy, there was a girl in the hospital with me who had just become a mother. Her condition was worse than mine, she was neither married nor baptized. Nevertheless we spoke about God, about faith, and matrimony.

Athough an attempted transplant had failed to help her overcome the disease, just before her health began to deteriorate, she had expressed the desire to marry. So, when she was already dying, I proposed to her family that she receive baptism. A priest came to the hospital and she was baptized “Margherita Maria”. A few days later she died on the feastday of Saint Margherita Maria Alacoque.” 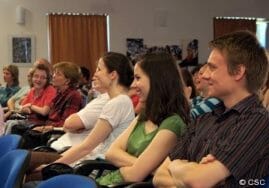 The day-long meeting began with this strong testimony given by Agnieska and it continued with experiences from daily life offered by the young protagonists of the Movement at the Mariapolis Centre. “Traveling the Road Together” was the title given to the day which, as the organisers tell us, was meant to offer an inside look into the “exceptional life of the ideal we believe in”. “To tell the truth, I was sceptical at first,” confesses Lukas, “I thought that there would be fifty young people at most, but that’s not what happened. Evidently the ideal of unity does have something to say.”

The hall was barely able to hold the 150 youths who showed up from different regions of the Czech Republic. For most of them it was their first encounter with the Focolare Movement and they were not bashful about expressing their happiness at having found something so great. “I learnt about the Focolare from a friend and I didn’t know what to expect,” says 17 year old Kristina, “but it really surprised me a lot because of the great love you feel from the persons who talk here. I must say that I strongly felt the presence of God. This really moved me, because my father is not a believer and I felt very bad that he didn’t get to know this movement.” 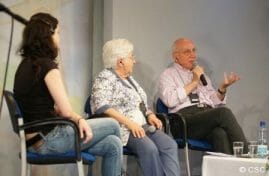 Maria Voce and Giancarlo Faletti share their own “journeys”, the way they met the Ideal of unity all the way to the point of deciding to follow God along the path of the focolare. Immediately questions began to rain down, and the answers were diverse and profound. To one girl who asked her where she could find the courage needed to make radical choices, free of conditioning, Maria Voce suggested: “The period of our life when we’re young is when we make important choices: if you don’t make them now, later you won’t have the opportunity. Yes, you need courage, but there is courage within you and you’ll find it in your relationship with God. If you choose out of love, then you don’t need to worry. Don’t put it off forever and don’t let others make your choices for you.”

The invitation was to “love to the maximum”, as Jesus had done on the Cross, “always beginning again”, and never dwelling on “useless regret”. The audience listened attentively in silence. The 150 young people didn’t want to leave. Twenty-seven year old Elizabeth confided: “I’m very critical and at the same time I’m seeking to uderstand how and where to live the Christian life well. I’m searching for my path, and so I gladly agreed to find out what the Focolare Movement was about. What I heard spoken today has been a great enrichment for me and it’s encouraged me to decide to become part of something. I leave here with the understanding that whatever I do in my life, God is important and I can’t only keep him for myself.” Not only for Elizabeth, but for many of those present it really seemed like a new path had opened for them.