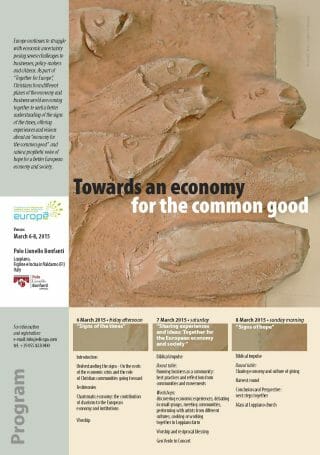 Europe continues to battle with economic uncertainty which is a real challenge for all enterprises, experts of economic policies and citizens. Christians from various economic fields and the entrepreneurial world will meet in Loppiano (close to Florence) from 6 to 8 March, to share their experiences and outlooks, so as to contribute to the diffusion of a prophetic message of hope.

«Up to now, in Europe, only the institutions have stated their opinions – affirmed Prof. Luigino Bruni. Our dream is that in the ministries for economy, there may also be Franciscans, Focolarini and people who have chosen to stand by the side of the poorest of peoples… There is need for gratuitousness. Over the last ten years these voices have been silenced. An economy without a heart, without charisms that are able to include also the poor, is an economy without a future. What do all Christian movements have to say today, about the economic plan? At the start of the millennium we set out on our journey, “Together for Europe,” with Chiara Lubich. After 15 years of working together at the level of gaining knowledge, it seems that this journey has become a working together for a different kind of economy, a different type of politics. The time has come for us to voice out our opinions. »

The idea of a convention was conceived on November 2012 in Munich, Bavaria, during the Together for Europe meeting. On that occasion, economy experts of some movements and communities of different countries and churches, made an appointment to hold a session for in-depth reflection, with the aim of giving a specific contribution in the field of economy, starting off from their own charisms.

The programme provided for a moment of reflection on the “signs of the times” we are all witnessing, with the sharing of experiences. The moments of reflection on the “signs of hope” were shared in a round table on the economy of sharing and “culture of giving.” The programme also included an experimentation work lab «of manual and not only mental work,» at the “Loppiano Prima Farm,” and an artistic workshop with the Gen Verde music group. The convention, entitled “Towards an economy for the common good” will be laid out in three work groups regarding poverty, enterprises and institutions. An expo will be installed with the works produced by each community.

Not only banks, markets and finance will be involved – Bruni continues – but contributions from the lower sectors of society, starting from from solidarity, so as to allow the involvement of the poor and excluded people. We shall attempt to pursue this path with some Catholics and Evangelicals (John XXIII, Schönstatt, Focolare, Ymca and Vineyard) acting as the preparatory committee, and with the specific aim of allowing the charisms to voice their opinions on the economic crisis Europe is undergoing.». The idea, therefore, is to give a perspective to Europe starting from the economy of reciprocity and as a gift and not only in terms of interests and profits. It will be an economy which arises from cooperatives, and the social and civic sectors.

«Europe’s economy –Prof. Bruni explains – was also created by Saints Benedict, Dominic and Francis (if we considered the the institution of the Pawnshops), not to mention the social charisms that invented the schools, hospitals, simultaneously with the world of commerce which progressed with the enterprises and the merchants. The new Europe will arise from this crisis, and to achieve a good Europe, it still needs today, the contribution of the charisms, modern charisms that speak the language of economy: there is a wealth of life in the European Christian movements that still have something to say that differs from that of the European Central Bank. We shall start with modesty, but our objective is to go to Brussels to address the institutions with our specific contribution. »