Giordani: The Role of the Writer 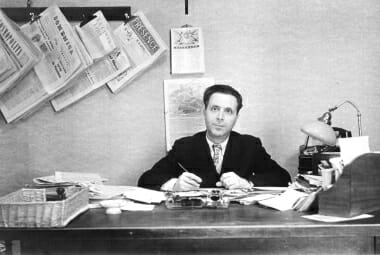 “In a rational world the writer should be located at the center of social life, as the one who directs and plays the spirit of the people. But the world is only partly ruled by rationality, in many ways is governed by instinct, by irrational passions such as fear. Writers become popular inasmuch as they discern and perhaps aggravate the instincts of the masses.

Today, on the one hand, technology reigns, mechanics, sports and cinema; on the other demagoguery, profiteering and politics first. If writers don’t want to see themselves reduced to a marginal function, they feel that they must serve material interests or interests marked by passion. They feel compelled to produce a journalism that often is necessarily subservient because of the huge cost to industrial groups, political parties, ideologies and profitable professions. Freedom of the press decreases because the free press is weakened under financial pressure, and the freedom of the writer is weakened. This helps explain the decline of what are considered great writers, and why more than one has switched to work in the political arena or sought out other areas of interest.

If the decline of rationality in people did produce the weakening of writing and writers shrinking to the margins, it is also true that it was the spiritual, moral and intellectual decadence of writers that distanced readers. The truth is that writers are both the cause and effect of their social environment. They need to be more the cause or less the effect. If they were what they should be –teachers or, I would even say, apostles or prophets – the people would either follow them or flay them. In short, they would show a lively interest in the manifestations of their spirit. The writer’s place is on the edge, the edge of discovery, the edge of risk. In fact, in order to carry out their apostolic mission of educating and raising the public, writers are likely to face poverty and misunderstanding.

The position of a writer is relative to the value of his or her message, and to its artistic strength and the manner in which it is expressed. In a world where technology and organization, planning and centralization, gregariousness and the fatigue of freedom have overtaken the human soul, overloading it with noise and commands, a free writer who contributes to spiritual liberation— the redemption of human beings— helping to overcome the large and small “failures” of the external and internal world, plays a greater role than that of the statesmen who are more popular.

In a world worn out by divisions and trembling with hatred and fear, one word of brotherhood and humanity, of charity therefore, spoken with clarity, beauty, and power would seal the gratitude of the people toward its author, conferring on him or her a central role in the orbit of civilization.