Chiara is remembered throughout the world 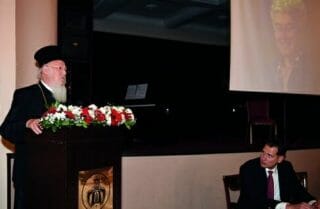 Her anniversary was a worldwide event with conventions and seminars held in several world capitals, a day of reflection on the prospects that emerge from Chiara’s message of unity, for the politics today. This was the common theme of many of the events at which she was remembered, but the relation between the charism of unity and politics was not the only aspect highlighted during her 7th anniversary.

In Istanbul, Patriarch Bartholomew I did the honors at an event presenting Chiara’s writings that have been published in the Greek language. The event involved more than a hundred representatives from the Orthodox and Catholic world. In his speech, the Patriarch referred to Chiara as one of the “holy women who with their example and their love that rests on the Divine philanthropy and with the inspired word of the Holy Spirit, continually solicit a metanoia, a conversion of the heart for all of suffering humanity.” 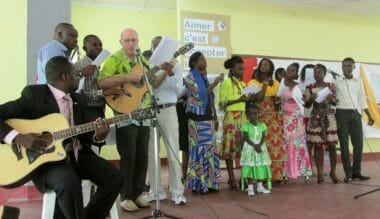 Within crisis situations – An answer to the political crisis going on in Congo appeared as the theme of two meetings held in that land. In Lubumbashi 370 people came forward, both Christian and Muslim. Young people from the Focolare presented an artistic rendition of Chiara’s love for the poor; her encounter with Igino Giordani; and her ‘dream’ for the unity of the human family. The Mass was animated by over fifty seminarians. Four hundred people attended the event in Goma, including a large group of politicians from the province of North-Kivu and representatives from civil society. Following the event, RTNC broadcasted the event in four local languages.

Some events were held in a few of the world’s hotspots. In Nigeria, for example, there were several events: in Yola to where many refugees have fled. The bishop celebrated Mass for Chiara, praying for peace. In Abuja and Lagos young people held a two-day preperation event for other young people. In Onitsha there was a meeting with more than 300 adults, young people and children. In Jos, where it was not possible to hold a large gathering because of an explosion a few days earlier, the Focolare groups paid a visit to a Penal Institute for Minors.

Peace was also the main topic at a day-long event organised in Bujumbura, Burundi, with over a thousand people. The programme included many testimonies that highlighted the possibility of living in harmony with others and building peace in places where that is not easily done. The Archbishop Evariste Ngoyagoye attended the morning portion of the programme.

In Central America, politics is a hot topic. From Honduras they write: “tired of corrupt politics and bombarded by violent news that generates discouragement in the popultiaon, we organised this event in order to share what the charism of unity has to offer both in testimony and in thought.” In Salvador that awaits the Beatification of Oscar Romero, we asked how unity could be lived in the midst of violence. Amongst the testimonies was that of Francesco, who was assaulted by a pair of armed youngsters. He was able to dialogue with them and speak to them about God. The boys were completely blown away; putting down their weapons they walked away.

In Pakistan, in Karachi, Lahore, Rawalpindi, Dalwal, over a thousand people held four celebrations, with hopeful expectancy following the tragic events of March 15 in Yohannabad. 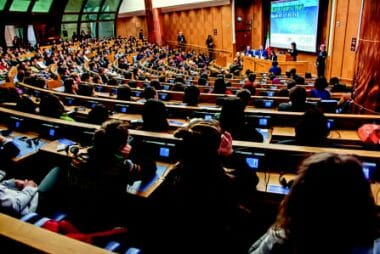 In institutional fora – In Seoul numerous deputies and people working in public adminstration met at the Parliament to take stock of the journey begun ten years ago towards a politics of brotherhood. In Madrid it was the Seat of the European Parliament to host a seminar on “One world, many peoples embracing diversity;” whereas, in Strasbourg, France, Seats of European Institutes hosted three-day events on the theme of fraternity as a political category. In Rome, a meeting titled “Chiara Lubich: Unity and Politics” was held at the Hall of the Palace of Parliamentary Groups of the Chamber of Deputies.

Several politicians gave presentations at the roundtable organised in Toronto, Canada, which focused on Chiara’s vision of politics. In Solingen, Germany, the central theme of the event was the culture of fraternity in three specific areas: refugees, peace, and dialogue with other cultures. Over a hudred people attended from various confessions, religions and nationalities.

“The political thought and action of Chiara Lubich” was the main theme of another project that was dedicated to Chiara at an event dedicated to her: the conference of Curitiba, Brazil, where commemorative postal stamps was also printed in her honour. The Parliament of the Province of Córdoba, Argentina, remembered Chiara by approving the decree of posthumous recognition of her work.

In other environments – Politics is not the only thing that was discussed on Chiara’s anniversary. Culture and the arts were at the centre of many quite original events. In Durban, South African Republic, the third edition of the “Chiara Lubich Memorial Lecture” was held with the participation of the niece of Mahatma Gandhi, Ela Gandhi. In Maracaibo, Venezuela, the Catholic University Cecilio Acosta (UNICA) held the Fourth Biannual Chiara Lubich Art Contest. It provided professional artists, art students and art lovers with the opportunity of displaying their work at the nations Republicj Square.

In other countries March 14th events were opportunities to come together. One such event took place in Cuba at L’Avana with more than 200 people, and in Santiago de Cuba with 150 people. The local Focolare communities prepared the events and presented the Focolare Movement with their own testimonies and the impact of the spirituality of unity in many areas of their personal life and in society.In Cochabamba, Bolivia, there were 120 people. In Mexico City and in the territoryof Nezahualcoyotl Chiara was remembered during the Mariapolis.

In Vietnam, both in Ho Chi Minh City to the south, and in the tiny village of Ngo Khe, Ha Noi in the north, people gathered around the altar to renew “before God and before Chiara, our commitment to be forever faithful to her legacy.” In Myanmar, at Yangon, where the majority of Focolare members never knew Chiara personally, they feel very drawn by her charism. Also in Thailand, both in Bangkok and in Chiang Mai, the Focolare Family gathered to celebrate. Six hundred people in the Slovack Republic, from Kosice and Bratislava. They write: “The testimonies from people of other Churches and from people with no religous reference, made us see how Chiara belongs to everyone. The Rector of the University of Trnava, Dr Peter Blaho, who in 2003 had conferred upon Chiara the honorary doctorate in Theology, shared his memory of meeting her.

In Fontem, Cameroon, 500 people from all the surrounding villages joined with Fontem to remember “Mafua Ndem,” Chiara Lubich. The theme was “The impact of the ideal of Unity in areas of social life.” The young people from the college presented their experiences with the “cube of peace:” “From when we introduced the cube in our classes, theft and truancy have decreased; academic performance has improved, each student cares for the other student’s property; there’s more tolerance and we forgive one another more easily; and the sharing has grown amongst students. . .”

Moments of prayer – Many civil and religious leaders attended Euchariastic celebrations that were held around the world. From the many interventions of Bishops and Cardinals at these celebrations, we present that of Cardinal Angelo Scola from Milan, Italy, who said among other things: “Our task today is to grasp with renewed awareness the dream that had animated the life and thought of Chiara, creating environments of brotherhood everywhere, wherever we find ourselves, and giving priority to the needs of the neighbour that is beside us, as well as the one that is far and living in lands where there is violence and war. This is how we want to become authentic witnesses of the charism that God gave to Chiara, being at the service of the Church and of humanity.”