Why I asked to return to Syria 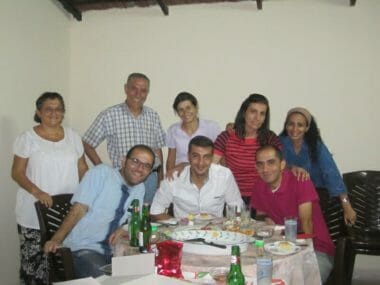 With a lively gaze and gentle smile that veils some sadness, Ghada describes the tragic events taking place in the country she has chosen as her home. Ghada, what made you return to Syria?

At the age of tewenty I left my family and country to follow God. In September 2013 when I requested to return to Syria, I felt the same impetus as before. I was frightened by the thought that I might die, but what I felt more strongly was the attraction to go back and live alongside the people whom I had met years earlier, to help them feel that they were not abandoned. I was urged by a desire to share their life, their fears, their unstable daily lives, because the bombs rain down when you least expect it.

But isn’t there any warning before bombardments, so that you can take cover somewhere?

There are no sirens announcing the strikes, nor is there any strategy in place that would allow you to know when the rockets will hit. On the other hand, this is now the fifth year of war and one cannot stay barricaded forever. You can stop for a day, a month, but then even through the mortars thunder, life must go on: the children go to school and parents work to support their families. Everything goes on under absolute risk and uncertainty. I lived the same drama when I was in the focolare house in Lebanon, but here it is far worse, much more difficult. Here you breathe terror and violence on all sides.

You had already been to Syria in the past. Can you tell us about the changes you’ve seen? 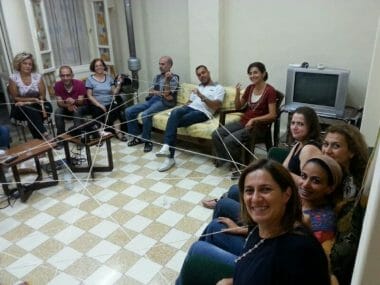 When I was in the focolar in Lebanon, I visited Aleppo, Homs and Damascus because there were still many people who wished to stay in contact with the Focolare. Because of the inner depth and sensitivity of the Syrian people, many meaningful relationships were created. We shared our Christian values that are so strongly felt in this place. Despite the plurality of Churches and rites, which is so typical of this land, there was still harmony amongst all. In 1994 when it was decided to open a focolare in Aleppo, two other focolarine and I were sent to open it. I was there for 9 years. Those were years of prosperity for Syria. The country didn’t have a public debt and the PIL was constantly rising. In the evenings we young women could go out and walk around freely.

Now the storm has arrived. But the worst of it is the loss of any hope that this war can end. I return with the other focolarine, to say that we haven’t forgotten them, that Jesus has made us a family and this is why we want to take the same risks. Like everyone else, we go to work, to church, to market – without knowing whether or not we’ll return home again. We’re there because of the love that binds the community in Syria, and the community there knows that we’re ready to give our lives for them, just as they are ready to do for us. This reciprocity is truly exceptional. They compete in making sure we are well, sharing whatever they have.

You focolarine are in Damascus, such a fascinating place, with so much art and history. What is life like there today?

In the city, but also in the villages, every day is a deadly challenge. Transportation is always a mess, because of the lack of petro and constant road blocks. You know what time you leave, but you never know what time you’ll arrive. Homes are without electricity for hours, the same with water. You reach the point of exasperation. The exodus – for the people who are able to leave the country – is continually increasing. It is estimated that over six million people have migrated, in spite of the serious dangers. But religosity remains quite strong. On Good Friday all the Christians attended the Way of the Cross even though they were well aware that bombs could have exploded at any moment, and they also had their children with them. Recently, one of our youth groups spoke had a Skype call with some of their peers in Portugal. The Portuguese wanted to send things to them and were asking our young people what they needed. Even though they are in need of so many material things, they only repeated: “Pray for us, pray for peace, pray that this tailspin of hatred stops.”

Your choice to remain in Syria is a powerful and courageous one. . . 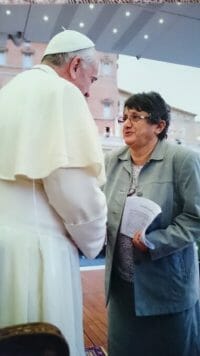 We don’t feel at all like heroes, because we are not here for personal motives. Before leaving I was able to meet Pope Francis: his encouraging words made me feel the love of the Church that draws near to this people that is undergoing such a hard trial. We also feel supported by the love of the Focolare Movement throughout the world. We need that support in order to not lose hope, powerless as we are in front of the supremecy of economic interests, and the international proliferation of weapons on the global market. We celebrate anniversaries; we create recreational moments for children and adults, in order to relieve the stress. We organise moments of spirituality; we pray together for peace. At Christmas our young people organised a concert. Three hundred people attended, including Muslims. Recently we celebrated a wedding. Two children were killed in that family and, because of mourning customs, that young woman couldn’t leave the house dressed as a bride. Therefore, she left from the focolare house, accompanied by all of us. We try to be involved in local Church projects and those of other ecclesial groups, so that we can help to wipe away a bit of suffering and deprivation amongst the people. We continue together to hope and believe, as we support every effort for the coming of peace.