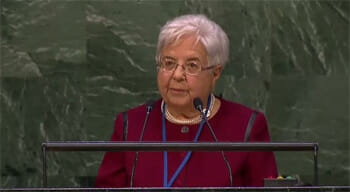 To risk your own life so as to relieve the suffering of the poor. This was Maria Voce’s invitation as she spoke of the last terrible phase of the Second World War, when in 1943 “a group of young women got together in the small city of Trent in northern Italy. While their city was being bombed, those young people, who were guided by a young teacher named Chiara Lubich, and urged on by a new understanding of the radical nature of Gospel love, decided to risk their lives to relieve the suffering of the poor.”

A choice many people make today too, helping to regenerate the fabric of society: Maria Voce referred to the refugee camps in Lebanon, Syria, Jordan and Iraq; the slums surrounding some huge cities and the united strength of those who “introduce into the destructive cycle of conflict a commitment to regenerate the fabric of society, by doing – according to the vocabulary of this organization would say – peace-building action”.   She affirmed: “Those young women decided to break the vicious circle of violence by responding with attitudes and actions which in the atmosphere of conflict might have seemed unrealistic or even irrelevant. However, they were not and they are not!”

“Today too we are experiencing very serious political, institutional, economic and social breakdown, which requires equally deep-seated responses, able to change the prevailing paradigm. It seems that conflict and violence prevail in many parts of the world, affecting innocent people, guilty only of being in disputed territory, or belonging to a particular ethnicity or adhering to a specific religion.” 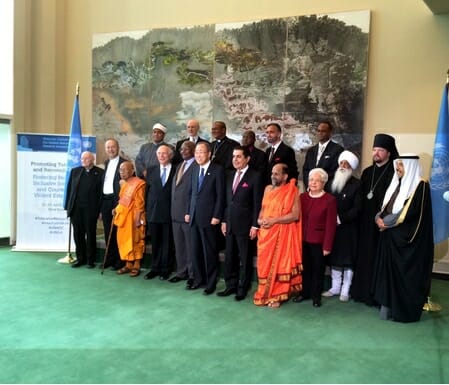 The encounter between cultures forms a new identity: “In the Focolare Movement, which I have the honour to represent – Maria Voce said – the encounter between cultures and religions (Christianity, Islam, Judaism, Buddhism, Hinduism and Traditional Religions) is an ongoing and fruitful experience not confined to tolerance or the mere recognition of diversity. It goes beyond reconciliation, essential as that is, to create, so to speak, a new identity, one that is broader, more general and shared. It is an effective dialogue which brings together people of very different beliefs, including non-religious beliefs. It spurs us to see what the real needs are and to respond together to the most difficult challenges in society, culture, economics and politics, as our commitment to a more united and socially inclusive world. This is happening in places which have been or are at present characterized by very serious crises, such as Algeria, Syria, Iraq, Lebanon, the Democratic Republic of Congo, Nigeria and the Philippines.”

The Focolare President dispensed with half measures. “If violent extremism exists – she stated – (…) our response must be similarly radical, but one that is structurally different, by which I mean “extremism in dialogue”! A dialogue which requires the highest level of engagement, which is risky, demanding, challenging and which aims to sever the roots of incomprehension, fear and bitterness.”

The civilisation of alliance: referring to the United Nations “Alliance of Civilizations”, one of the promotors of this event, Maria Voce asked “whether, nowadays, we could get closer to the roots of this new outlook and focus not only on an alliance of civilizations but on what might be called the “civilization of alliance”; a universal civilization which enables peoples to see themselves as part of a great happening, which is both varied and fascinating, that is humankind’s journey towards unity. A civilization which makes dialogue the pathway to recognizing each other as brothers and sisters, as free and equal.”

Among the many organisations represented at the debate, she mentioned New Humanity, the NGO which represents the Focolare Movement at the UN; and regarding the United Nations Organization itself she posed the question:

“Shouldn’t the United Nations Organization perhaps reconsider its own vocation, and reformulate its own fundamental mission? What does being a “United Nations” organization mean today, if not an institution which truly works towards unity among nations, while respecting their strong identities? It is certainly essential to actively maintain international security but, although security is vital, it is not necessarily the same thing as peace.

Conflicts within nations and international conflicts; the deep divisions we are aware of at world level, together with the great local and global injustices, in fact require a true conversion in the actions and choices made in the field of global governance, to put into practice the motto formulated by Chiara Lubich, and launched in this very place in 1997, “love your neighbor’s country as your own” so as to build up universal fraternity. 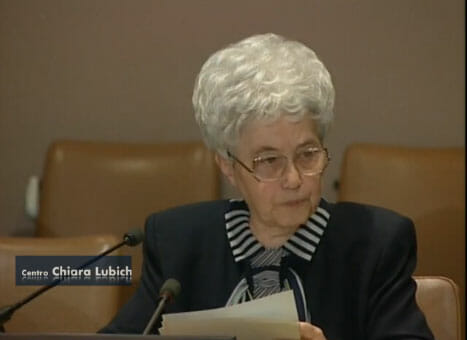 Chiara Lubich: “Toward a Unity of Nations and a Unity of Peoples” – United Nations Headquarters (New York), 28 May 1997

War is irreligion: “Lastly, we cannot give ground to those who attempt to describe current conflicts as “wars of religion” – Maria Voce went on. “War is by definition irreligion. Militarism, economic dominance and intolerance at all levels are causes of conflict, together with many other social and cultural factors among which religion is often only an unfortunate pretext. What we are witnessing in many areas of the world, from the Middle East to Africa, including the tragic deaths of hundreds of people fleeing wars who are shipwrecked in the Mediterranean, has very little to do with religion. From any point of view, in these cases we should not speak so much about wars of religion but more concretely, realistically and prosaically, about the religion of war.

What can be done? Quoting Chiara Lubich, Maria Voce invited the audience to have the courage to “invent peace”. “There are many signs that a new awareness may finally emerge, out of this serious international situation, of the need to work together for the common good, (…) and with the courage to ‘invent peace’. The time for ‘holy wars’ is over. War is never holy, it never has been. God does not want it. Only peace is truly holy because God himself is peace.”

She ended with reference to the Golden Rule which reflects the foundational inspiration of religions and unites them, so that they should “not [be] a tool used by other powers, even for the noblest aims; or precepts studied so as to resolve conflicts or crises, but rather a spiritual process which can be lived and becomes a community able to share and give meaning to the joys and sufferings of people today, channelling everything towards the realization of one universal human family.”