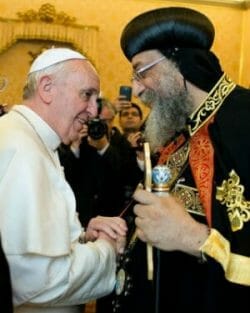 After the historic meeting between Francis and Tawadros II (Pope of the Coptic Orthodox Church and Patriarch of Alexandria), which place on May 10, 2013 at the Vatican, for the first time a day of celebration was held in Alexandria between the two Churches in commemoration of that meeting.

Three months after the election of Francis, Tawadros II went to visit him on the day of the 40th anniversary of the historic visit of Pope Shenouda III to Paul VI. On that occasion, the Coptic Orthodox Patriarch had proposed that May 10th be celebrated each year as the Day of Friendship between the two Churches.

The event was celebrated on June 7, 2015 at the Jesuit Cultural Centre in Alexandria, Egypt, under the patronage of the Coptic Catholic Patriarch, Ibrahim Ishak, in the presence of Tawadros II, who was joined by 8 Coptic Orthodox bishops and 5 priests. Also present, Papal Nuncio, Bruno Musarò, Latin Bishop, Adel Zaki, and around 100 Religious men and women, and Catholic priests.

Promoters of the event included Sohphia University Institute (SUI); the current Director of the Cultural Centre and ex-student of SUI and friend from the Orthodox Church.

Following a moment of prayer with readings and songs, a documentary film was presented that recalled the various stages of the historic meeting between the two Churches. In his message, Pope Francis reminded everyone that “what we have in common is much greater than what divides us” and that “we can persevere in our march towards full communion, and grow in love and understanding.The Coptic Patriarch immediately responded. That afternoon he telephoned Pope Francis, confirming his “will to continue in the common effort for the unity of Christians,” as Vatican spokesman Father Lombardi reported.

In his speech, which was filled with affection for the Bishop of Rome, Tawadros II expressed his conviction that “today’s world is hungry and thirsty for concrete love. The unity between the Churches is in need of heroes of the faith,” and he indicated some necessary preconditions for reaching unity, such as openmindedness, and praying each day: “Give me an open mind, oh God, like the mind of Our Lord Jesus towards the Samaritan woman, and towards the Good Thief on His right.” But also a big heart, capable of going “beyond the letter.” And, finally, a humble soul that “safeguards the gifts and grace that God bestows.” His Holiness was moved as he described the touching humility of Pope Francis, when he met him and said to him again: “This day we have to celebrate every year!”

Tawadros II personally greeted each of the guests.

The joyful event ended by remembering the “ecumenism of blood” and the Egyptian and Ethiopian Martyrs in Lybia.