The European Union: “Dialogue is not a ritual” 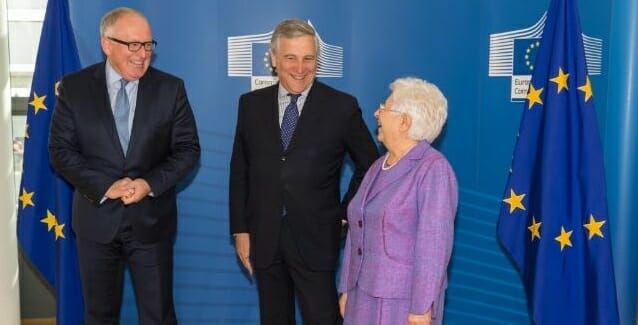 “For me dialogue is not a ritual; it is not something we do once a year and then put back on the shelf again. For me it is an essential contribution to finding solutions to some of the most difficult problems European societies are facing today, problems linked to fear of what is different, linked to the consequences of the crisis, the need for environmental sustainability. Religions will have to play the role between the communities, to perhaps help us bring Europe in a better place than it is today”. These were Frans Timmermans’ words after the annual High-Level Gathering of Religious Leaders which addressed the theme “Living together and disagreeing well”. With the First Vice-President of the European Commission were Antonio Tajani, Vice President of the European Parliament and 15 religious leaders from Christian, Jewish, Muslim, Hindu, Buddhist and Mormon traditions.

An understanding of the role of religions is shown by the growing number of occasions which bring together political institutions and religious leaders. Religious leaders are invited not so much on an individual basis but so as to work together, to find solutions to conflicts and to seek a way forward towards peaceful co-existence. See the recent High Level Debate on Tolerance and Reconciliation at the United Nations, the meeting of religious leaders in Kazakhstan, the invitation to Pope Francis to speak at the United Nations and now, at European level, this meeting organised by the European Commission. Today’s event follows on from the meeting held on 2nd June with the philosophical and non-confessional organisations, and it falls within the framework laid down by the Lisbon Treaty. 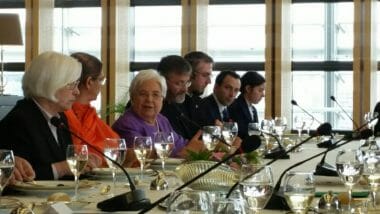 Some burning issues came up at the press conference – which concern European policies on immigration, the growth of foreign fighters (those who leave Europe to fight jihad), and the rise of far right groups in the European Parliament – which were answered by Imams, Rabbis and Bishops. Metropolitan Joseph, from the Romanian Orthodox Church, also highlighted the role of ecclesial Movements, like the St Egidio Community, referring to its work for the progress of interreligious dialogue.

On leaving this long dialogue, Maria Voce, President of the Focolare Movement, expressed her joy at having participated in a truly free exchange, with genuine listening. She emphasised the Golden Rule, shared by all religions. Among the examples she gave of it being put into practice was the experience of the interreligious group “Vivre ensemble à Cannes”. Outside the main meeting she said: “There is no religion that does not want dialogue, there aren’t any religious leaders who don’t seek to do all they can to promote it. This gives hope because, despite all we see around us, religion can truly bring a new message and help in the process of dialogue which can at times seem almost impossible”. She further emphasised “that it is important for communities to be involved in dialogue and not only religious leaders, to foster a synergy that can lead to a shared effort in European cities to enable peaceful co-existence. This can come about only by overcoming feelings of fear – which are understandable when facing the unknown – with feelings of welcome, respect and the capacity to welcome the other truly as a brother or sister.”

The outcomes of the debate on 16th June will be included in the discussion material for the first annual conference on Fundamental Rights, of the EU, to be held on 1-2 October 2015 and which will focus on the theme: “Tolerance and respect: to prevent and combat anti-Semitic and anti-Muslim hatred in Europe”.

Video of Religious Leaders being welcomed

Press Release by the European Commission