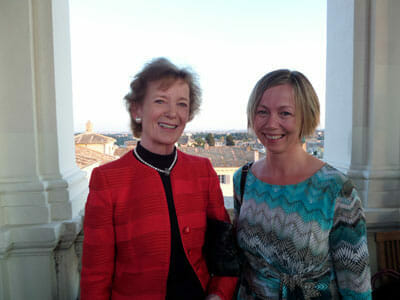 180 people from over 40 nations: activists, NGOs, social movements, scientists, religious congregations, activists from the Catholic world and beyond, together to discover concrete ways of responding to Pope Francis’s encyclical Laudato Si’.

Environmental experts Lorna Gold from Ireland and John Mundell from the United States attended as representatives of the Focolare Movement and Eco-One. For over 13 years Lorna Gold has worked in the field of the environment at Trocaire-Overseas Development Agency of the Catholic Church in Ireland. John Mundell is president of an environmental consultant agency in Indianapolis, Mundell & Associates, Inc., which adheres to the Economy of Communion.

“The most important thing about this conference is the diversity among the people, organisers and ethnic groups that came together to give an immediate response to the Pope’s Encyclical,” Lorna Gold says. “We’ve come here from the whole world and in the name of civil society. There are activists like Naomi Klein, a world-renowned writer on the topics concerning ecology and economy in an age of globalisation; there are people from ecological movements like the head of Greenpeace, Kumi Naido; there is the entire network of the CIDSE-NGO, Catholics who work for social and global justice.”

The three-day meeting gave the sense of a movement in the act of helping to incarnate the ideals of the Si’ Encyclical. Among the examples that were presented there was also the The Earth Cube™, created by Eco-One, a network of professionals from the field of the environment who are inspired by the spirituality of unity.

The difficulties and the complexities of the environmental problem were on the minds of all: a problem not only for science and of the earth, but also for the economy and politics. Often the choices in these environments go directly against nature and generate more poverty but, according to Naomi Klein, something can still be done: “We could prevent so much suffering. We can’t justify doing nothing, because it’s difficult. Don’t let perfect win good. We need difficult, but possible, instead of easy yet reprehensible. Stop making the difficult a limit for possible, and let possible be real.”

The reverse route is possible if there is enough strength to face the problem. The presence of so many people directly involved on many different fronts gives much hope, and it made everyone experience what Pope Francis says in the Encyclical: the whole is more than the sum of its parts. John Mundell highlighted another novelty at the meeting: “The role of women as protagonists in the discussion and debate on climate change. In this summit we almost saw a vision of the future of the Church: open, in dialogue with the world, seeking relations with all people of good will, to bring ahead a more united world, more in contact with the planet.”

Laudato Si’ invites us to rethink our lifestyle. As Naomi Klein said: “This is not only a teaching for the Catholic world, and as a secular Jewish feminist, I can say I felt this Encyclical also talking to me.”