USA: Dialogue and the difficult questions 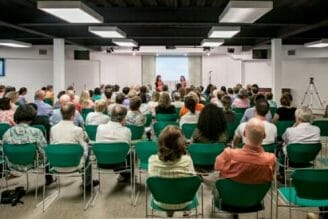 In 1998, Chiara Lubich established the Education for Dialogue Centre in Mariapolis Luminosa, the Focolare’s permanent Mariapolis in the State of New York. For that occasion she wrote: “May all those who take part in the activities of this centre also feel like builders of this new reality, collaborating with love, patience, mutual understanding and solidarity, in order to create an island of peace and a sign of unity for today’s world. . . may it especially be a school where one learns to live out this love, which is the only thing that can make the peoples of the earth a single family.”

“These words from Chiara also informed a recent meeting of August 15 and 16 at the North American Mariapolis, titled: Dialogue and the Difficult Questions. It was attended by a hundred people and it focused on how to dialogue and communicate with people who think differently.” 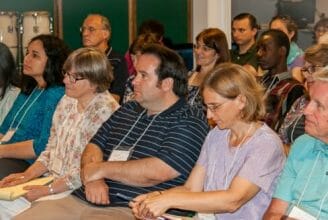 There were also very valuable contributions by four experts in moral theology and political theories from Fordham University (New York), Providence College (Rhode Island) and Georgetown University (Washington D.C.). They write: “We began with some words from Chiara Lubich on the dialogue that emerges particuarly from the spirituality of unity which, if practiced, helps to transform people’s relationships with eah other.”

Charlie Camosy (Fordham) and Amy Uelman (Georgetown), examined the “reasons why USA society is so polarized by opposing positions and how the walls between people could be broken down by listening and being open to others.” Dana Dillon (Providence College) dealt with the delicate relationship between love and truth, based on one of the main points of the spirituality of unity: Jesus forsaken. The theologian presented Him as the true model of dialogue inasmuchh as “He entered into the disunity of that moment in which He felt abandoned by the Father, unifying the greatest division possible, the one between Heaven and earth.”

In the afternoon there was an interactive programme offered by Claude Blanc, a leadership coach and team work consultant, who guided the participants in several exrecises in “learning to listen deeply and without pretexts.” A reflection on “Different Ways of Communicating” (imposing, discussing, trying to convince the other, and focusing on the common good), given by Bill Gould (Fordham),brought the session to a perfect conclusion. 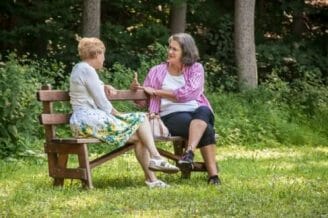 The roundtable discussion on Sunday, evidenced the need for being prepared to confront some current burning issues as well as the challenges of daily life.

Two impressions: “The workshop on listening helped me to see how importnat and fruitful this can be in daily relationships;” “I leave quite enriched by this experience.”