Hoping for peace in the Central African Republic 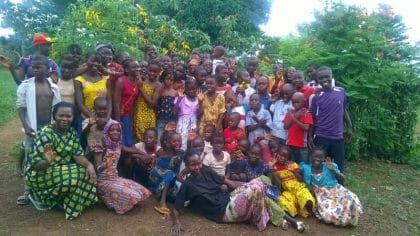 It is difficult to know the numbers – Misna sources report 60 dead with 300 wounded – and describe the events in a country that has been sinking in political crisis since March 2013 when a group of rebels overthrew the president; and there have been further outbreak in recent days.

“The socio-political situation has worsened,” writes Geneviève Sanzé from the Central African Republic. “Christian families live between the house and the forest, so that they won’t be discovered at home and lose their lives. One priest, who lives in the north where the situation is quite serious, is offering shelter to 12,000 refugees in his parish, who are taking refuge from projectiles that are being launched all around them. He doesn’t know how he will care and find food for them. There is no more adminstrative , political or military authority in the region, and there is the constant danger of bombs in crowded areas.”

From the Focolare of Bangui they write: “We were preparing to do something concrete to help promote the peace that our country is so much in need of: a sport competition with mixed teams of Christians and Muslims; a march for reconcilliation comprised of all sorts of ethnic and religious groups; a concert by several musical groups, including our own to help sway public opinion towards the need for peace; continuing visits to refugees here in Bangui and in the prison. We invited our Muslim friends and friends from different Christian churches to take part in organising these and other events, and they enthusiastically accepted.”

“The first event had been planned for the 26th of September, but was not held because of a massacre that taken place here in Bangui on that day,” recounts Berndadine who works at the Nunciature. “It all began with the discovery of the lifeless body of a young Muslim woman in a Christian area. But the murderer and the circumstances surrounding the death are still unknown. In the span of a few hours non-Muslim homes were attacked, and many people were killed.”

Death is everywhere, looting, destruction of houses, churches, schools, offices of international organisations and many displaced persons, including several from the Focolare community. Some have lost close relatives. They write: “We encourage each other to love, each one of us wherever we are, ready to die for our own people. Pray with us, for us and for everyone living in similar situations.”

The city has seemed dead for days. “You didn’t go to work,” wrote Bernardine. “The shops were closed, the only vehicles on the street were those of the United Nations and the French Military. The population organised a protest calling everyone to civil disobedience, demanding the restoration of the national military to protect the people. More people died during the manifestation and everything stopped. Things have improved a bit in recent days, we’ve resumed some of our activities, although schools are still closed. We’re in God’s hands and we always believe in His love. Sooner or later there will even be peace in the Central African Republic.”

And this hope is supported by the upcoming visit of the Pope in late November. Fidelia, from the focolare in Bangui, recounts: “The entire population, regardless of ethnic or religious group, joyfully awaits his coming. You can feel it in the air, that the people are expecting him as the bearer of hope. Everyone is preparing spiritually and materially in order to be disposed to welcome the graces that Pope Francis’s visit will bring.”