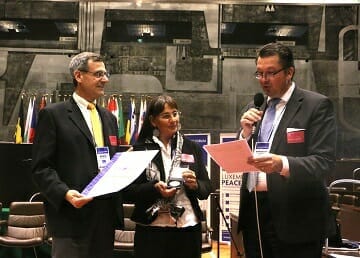 The prize, given by the Schengen Peace Foundation was assigned to New Humanity, an NGO that represents the Focolare Movement among international organisations, during the Youth World Peace Forum that both organisations had collaborated in organising at Rowad American College in Cairo last May, as part of the Living Peace Project that involves more than 80 thousand students and 200 schools around the world in planning and carrying out peace education projects.

“After being so struck by the extraordinary volunteer work of so many young members of the Focolare Movement,” writes Dominicus Rhode, president of the forum and of the foundation, “we immediately decided to award the 2015 Luxembourg Peace Prize to New Humanity.”

In accepting the award, Marco Desalvo, president of the organisation, remarked: “We are especially pleased because this was the reason for which New Humanity was begun, to contribute to the creation of the unity of the human family, respecting everyone’s identity, and and promoting the spirit of universal brotherhood. This is an award for which we are grateful, but mostly an encouragement to continue on with our work.”

While describing the activities of New Humanity in the world’s ‘hot spots’ like Syria and the Middle East, but also in Europe, Desalvo, vice president Cecilia Landucci and Anita Martinez also announced the beginning of a collection of signatures for a petition that would be taken to international leaders and to the United Nations: “In this appeal,” he explained, “we ask all governments to fight extreme poverty with renewed commitment to reducing inequality; to continue in the effort to guarantee a basic education for everyone; to reduce public spending for arms so as to free up resources for development; to take a second look at the current systems of government in terms of a greater democratic control of economic and monetary politics; and to adopt new systems and applications of the laws to fight organised crime.”

The Youth World Youth Peace Forum, within which the prize was awarded, is a global platform for improving the exchange of best practices amongst associations and individuals active in the area of peace, and joins a large number of professionals from all backgrounds from around the world, who share their hope.

Several presentations highlighted ways of coming up with peaceful alternatives to conflicts which have always proven to be more efficacious, at all levels and from every standpoint – rather than war. Testimonies were also given by Syrian refugees and people from other lands, as well as by those who welcomed them in, and of others who are currently giving medical, artistic, and spiritual contributions to peace.

The next Forum will be held in Florianopolis, Brazil, in September 2016. Preparations are already underway, but the end goal of all the work involves an ongoing daily commitment and involvement, as was expressed in many of the impressions and testimonies that were shared.

One Syrian woman, for example, was asked what she would say to her Focolare friends who stayed behind in Aleppo, Damascus and other places in Syria. She answered: “Life is precious. If they are still in Syria, it is because they have a duty, and a message to bring. Those who cross and leave Syria must continue the work, with the same spirit of the people who could not leave the country. I continually pray to God that He will stop the war and save us from this tragedy, so that all can live in peace.” 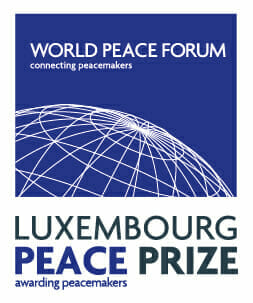