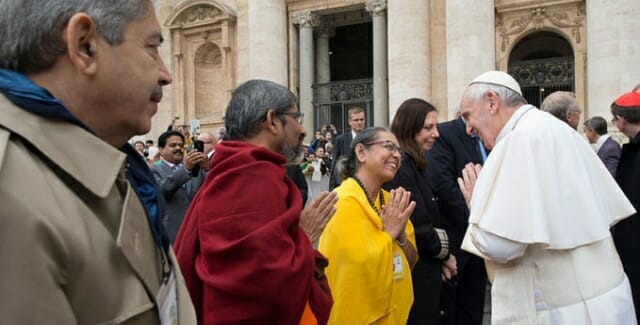 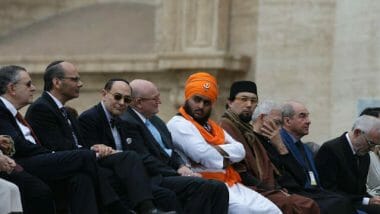 On 28 October 1965 at the conclusion of the historical assembly of bishops of the Catholic Church, the Council Fathers promulgated Nostra Aetate, the shortest document ever to be issued by the council’s working sessions. Half a century has passed since then, and the impact of those few pages revealed to be prophetic considering that the Catholic Church had passed centuries in the more or less firm conviction that there was ”no salvation outside the Church” – the famous Latin adage extra ecclesiam nulla salus. In February 2013, a few days before announcing his ”retirement” and upon reflecting on the Council at the end of the celebration of its 50th anniversary, Benedict XVI defined this document as a « trilogy that revealed its importance only in the course of decades,» along with Gaudium et Spes and religious freedom. In effect Nostra Aetate opened the Christian world’s horizon towards the others in their ”otherness,” but the management of which, according to the council’s procedures was not at all easy.

At the personal suggestion of the French-Jewish historian, Jules Isaac to John XXIII, the Pope entrusted the initial scheme to Cardinal Bea. The idea was to draft a document that would contribute to prevent the repetition of tragedies like the Shoà, but after long and complex debates, the Council laid down a few pages addressing all the religions of the world.

In effect, through a laborious and difficult process, the document opened to all the main religious faiths, undoubtedly and particularly stressing the confrontation with Judaism and Islam.

Nostra Aetate underlines how the Jews should be presented in a positive manner: “They should not be presented as God’s rejects or as accursed, almost as if this came from the Holy Scriptures.” Above all, it excludes Israel’s collective responsibility for the death of Jesus. Therefore, this radically changed the views the Christian and Catholic world had of Israel for two millenniums. Likewise, a great respect emerged also towards Islam. “The Church regards Muslims with esteem” – declared the document – and “if in the course of the centuries, many disagreements and hostilities arose between Christians and Muslims, the Holy Council urges all to forget the past and sincerely practice mutual understanding, and together defend and promote social justice, moral values, peace and liberty for all.”

As earlier said, also the recognition of the traditions of Hinduism and Buddhism is clearly highlighted, without forgetting the traditional religions. In fact, the document also affirms that “the Catholic Church does not reject what is true and holy in these religions.” What history often has not recognised as religions are now valued by Catholic tradition which acknowledges the presence of truth and sanctity also in their traditions. 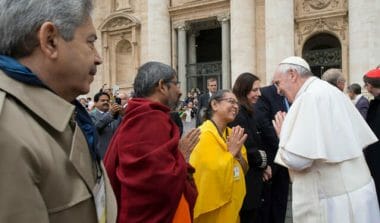 Today, a great variety of events are being celebrated in various parts of the world to reflect on the value of Nostra Aetate and the consequences it has brought about between men and women of different religious traditions. Amongst all is the particularly important event held at the Pontifical Gregorian University and organized by the Pontifical Council for Interreligious Dialogue. For three days, from 26 to 28 October, about 400 people of diverse geographic, cultural and religious areas met and reflected together on what has come about over the last 50 years. There were representatives of all the major religions of the world (Jews, Muslims, Hindus, Jainists, Buddhists, and Sikhs and those of the Tenri-kyo and the traditional African religions). They reflected on highly relevant themes today, violence, commitment to peace, the challenge of religious freedom, education and transmission of values. 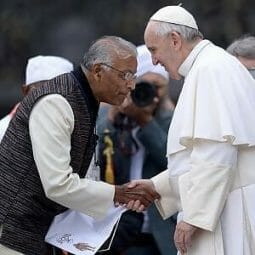 The convention was opened by Card. Jean-Louis Tauran, President of the Pontifical Council for Interreligious and by Card. Kurt Koch President of the Pontifical Council for Dialogue for the Promotion of Unity among Christians, and ended with a valuable and articulated reflection on ”Educating toward peace” by the Secretary of State, Card. Pietro Parolin. The participants then took part in the Audience in St. Peter’s square where Pope Francis dedicated his catechesis precisely to Nostra Aetate. He proposed a road-map for the future of dialogue, and encouraged all to work together for the poor, justice, the environment, and of course, peace.

Rita Mousalem and Roberto Catalano, co-directors of the Centre for Interreligious Dialogue of the Focolare Movement, participated in the convention and conveyed the greetings of Maria Voce and the Movement when they briefly presented the important features of the Focolare’s interreligious dialogue and ensured the commitment of its members in continuing to work for the encounter and friendship between men and women of diverse faiths.