Solidarity with the Central African Republic 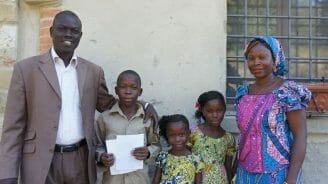 The escalation of serious political-military uprisings has not changed the programme of Pope Francis. An authentic messenger of peace, he announced in his sermon on All Saints Day that on 29 November he will be visiting that troubled country which has been experiencing one of the many war hotspots of the planet, for more than three years. The International Community seems to have ignored these fratricidal, forgotten wars.

It all began in 2012 with the occupation of vast areas of the country by a segment of the group of rebels, who destroyed not only the institutional offices but also all that bore the mark of Christians: a new factor for the prevalently Christian Central African Republic, with a minority of Muslims and people of traditional religions who peacefully coexist. There were outright profanation of churches, and raids of social work centres, schools, hospitals, dispensaries, shops and homes of Christians, leading to a n immense food and health emergency situation. Out of a population of five million inhabitants, 820,000 have had to leave their own homes. Construction works can no longer continue, children cannot be sent to school, and farming activities have stopped. Even that parcel of community land, which an Italian Foundation had bought a few years back for the families of the Focolare, forcedly remains uncultivated and still consists of a fenced lot, a well, the keeper’s guardhouse and year by year, resources for the acquisition of seeds. A project that has helped to feed the families and also earn something through the sales of some products, have all gone. What remains active is the AFN (www.afnonlus.org) which gives support from a distance to children and adolescents. But the subscriptions total 89, and are like a drop in the ocean.

In 2013 Petula and Patrick Moulo, with three kids and two adopted ones, hosted 34 people in their home, sharing with them all they had. Even if the food, space, and blankets were limited, love made up for what was lacking, making all experience that “A piece of dry bread shared in peace, is better than abundance amid strife” (Prov. 17,1). Among these was also a Muslim woman with her small children. Also the other families of the Focolare opened out their homes and hearts. The population is trying to keep a peaceful attitude of non-resistance, with the hope of lightening the repression. But this is not so. When it seemed that all had been resolved – with the so-called “liberation” of December 2013 – the warfare sparked up again, leaving a trail of devastation behind it. Many bodies remained unburied. After two months, bodies of the tortured and killed people were still seen flowing down the rivers. There are those who take refuge in the field, in the cold and without food. Every family has suffered the killing of one member. This is a hidden, deceitful war that has caused more than 5,000 victims, overwhelming the entire population with hunger, diseases, insecurity, and delayed salaries.

At the start of 2015 there was a truce, but the recent bloodshed of 26 September and 29 October reignited the terror: deaths, wounded, and burnt homes. In a night all the refugee camps that had been slowly emptying out were again filled up. In the Focolare “camp” 96 adults sleep in the open while their children are placed in the tiny guardhouse of Irene and Innocent, the project keepers. The Focolare community puts together the little it has: clothes, food, and blankets to be shared with those who have lost all their belongings, also helping the evacuees gathered in the various centres. The people are at the end of their tethers.

Pope Francis will soon be in their midst “to represent the solidarity of the Church in prayer (…) and to urge all the Central Africans to be always testimonials of mercy and reconciliation…” We will all accompany him with our prayers, together with our small but concrete, gestures of solidarity.