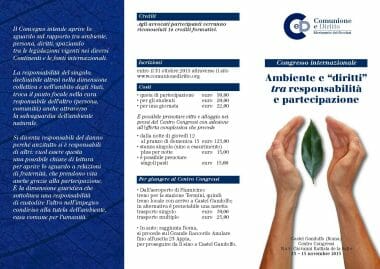 Environment and Human Rights: A very topical issue only a few months after Laudato Si’, the Encyclical of Pope Francis on the environment, and on the vigil of the COP 21, the United Nations Conference in Paris on climate change. How was the idea born?

“We have been working on this project for two years, which happens to fall at an extremely favourable moment for focusing on the environment. The Congress titled “Environment and ‘Rights’ Between Responsibility and Participation”, was born from the shared experience of a judge involved for many years in the court cases that arose from the tragic consequences and serious harm caused by the irresponsible use of the natural resources. Cognizant of the far reach of the Communion and Law network that extends to all parts of the world, he thought it could be a means of sharing and giving visibility to the problems and difficulties of the most distant and forgotten regions of the world. The idea was born of doing something that would bring a positive global response.”

The programme indicates a heavy involvement of young people. What was the background process?

“It was all the result of the encounter between European and African young people that took place during the March 2014 International Seminar at Castel Gandolfo, Italy. Those young people studied the theme of the environment in the perspective of responsibility and participation, and they committed themselves to continue their research up until the Congress that is scheduled for November 13-15, 2015.”

Those attending will come from 4 continents, representing 21 countries. Therefore, there will be an international perspective from which to examine the laws that are in force in the environmental field, but to what end?

“We would like to highlight the concept of relatedness that is inherent to being human. Our relatedness to others, in a relationship of care and attention demands responsibility in our relations both with other people and with nature. If we live in this way, those relationships will enable us to also gather the relationships of Love that underpin Creation. Another goal is to reinforce the concept of participation in legislative activity. During the congress we will evaluate a proposal of popular law that moves in that direction. The proposal comes from a Sicilian regional law concerning the territory of Pachino, which reveals the contrast between ‘legislative procedure’ and ‘participatory power’. Actually, communication with the interested parties is fundamental so that they can evaluate the current legislative and regulatory proposals.”

“Moreover, we would like to give a voice to near and distant lands that are also different from one another, often forgotten or in the spotlight only because of dramatic situations, like the Central African Republic, for example. The discussion will not only be theoretical but will include stories and testimonies: on-going investigations into the damage to the environment because of irregularities, ‘halts’, the powers that be in the state apparatus, the problem of deforestation and desertification in Sub-Saharan Africa.”

It is also a meeting with an interdisciplinary approach. Amongst the participants is EcoOne, for example, which is a network of researches in the field of Ecology and the Environment that shows the years of attention given to the environment by the Focolare. . .

“Scholars in ecology, environmental physics, but also economists, educationists, political scientists, architects will also join us. With them particularly during the roundtable on Sunday morning, our reflection will shift to the prospect of a unitary vision that could reconcile the terms: people and nature. During the last session, there will be an address by Focolare president, Maria Voce who was one of the initiators of Communion and Law, the network of scholars and law workers that was begun in 2001 because of an intuition of Chiara Lubich. In a nutshell, Communion and Law promotes and accompanies a variety of initiatives for elaborating and spreading a new culture founded upon relatedness as a juridcal category, but also key in the relations amongst law workers.
Press releases