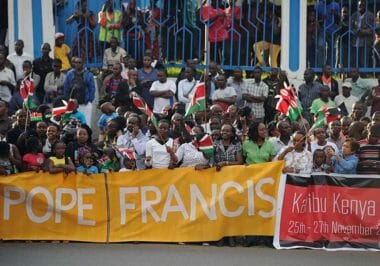 come to Kenya, Pope). Amid festive songs and dances, the Pope landed in Nairobi in the afternoon of 25 November for the first leg in Africa. From the airport and all the way to the city, two waves of crowds accompanied the papal automobile: a simple grey car.
In his first greeting Francesco expressed his love for this “young and vigorous nation, a community enriched by diversity.” “Kenya has been blessed, not only with immense beauty in its mountains, rivers, lakes, forests, savannahs and semi-deserts, but also with an abundance of natural resources.” He went on to say: “In a world that continues to exploit instead of protecting our common home,” I hope that your values inspire “the endeavours of the government in promoting models of responsible economic development.”

The papal agenda is full: the meeting with the clergy, to whom he gives three key words, weep, pray, and serve; and the session with the UN representatives of Nairobi, from whom he asked for a ”change of direction” so that economy and politics could be placed at the service of the person, in order to eradicate malaria and tuberculosis, be persistent in fighting against deforestation, and target fair trade and development which takes the poor into account.

The meeting with the leaders of the various Churches and Muslim and Animist communities was highly significant, and where he affirmed that ecumenical and interreligious dialogue is not a luxury or an option. He then strongly stressed that phrase which echoed throughout the world: “The holy name of God must never be used to justify hatred and violence.” 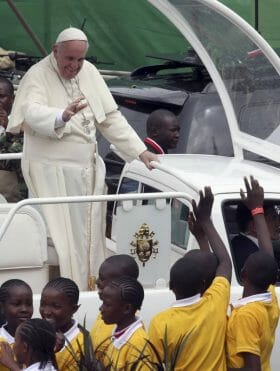 On the 27th, the last day in Nairobi, he went to Kangemi, a very poor shanty town where conditions of human and environmental downgrade have amassed, and which had specifically pushed him to denounce this situation of Kangemi before the UN. He was met there by 100,000 people who waited to welcome him with dances and songs. And Francis did not disappoint them: “I feel at home,” he said. “I share this moment with you brothers and sisters who have a special place in my life and in my choices. I feel your sufferings deeply. I know the pain you bear. How can we not denounce the injustice suffered?”
Before leaving for Uganda, he met the youth in the Kasarani stadium to answer all their questions, such as: how to overcome tribalism, corruption, and enrolment of the youth. “Overcoming tribalism – he replied – is a daily task, a job for one’s ears in listening to the others, a task for the heart in opening it to the others, and a labour of the hand in reaching out towards one another.” He added that, “Corruption is something that creeps into our hearts like sugar which is sweet, pleasant, and easy to take, but then we end up in trouble.” And how can radicalisation be overcome? “The first thing we must do to prevent the enrolment of a young person is to offer education and employment.”

Each of his meetings overflows with affection, closeness and love. And the people responded with gratitude, joy, and hope. Inculturation of the Gospel is one of the most important challenges in these lands and we must take into account the aspects perceived as values that pre-existed before Christianity: the vision of the family, the role of the clans, tribes, polygamy, and that of the Muslims, etc. It is a challenge which also the Focolare has faced ever since it came to Africa in the 1960s, and which it continues to sincerely undertake with the people of the place, in the spirit of reciprocity. A journey led Chiara Lubich in 1992 to found, precisely in Nairobi, a little town of witness, where specific inculturation courses are held. The next one will be held in May 2016, with the participation also of Maria Voce and Jesús Morán, President and Co-President, respectively.

Watch video of the foundation of Mariapolis Piero