Artisans of peace on the increase

All of us here are involved in helping refugees to integrate in our coundry,” they write from Germany. “Some of us give German lessons, some provide lodging, some give of their time to be with the refugees. We are currently waiting for the arrival of 9 unaccompanied minors from Syria and Afghanistan. They’ll live for six months at our centre in Ottmaring where they will be assisted by social workers from the city.” 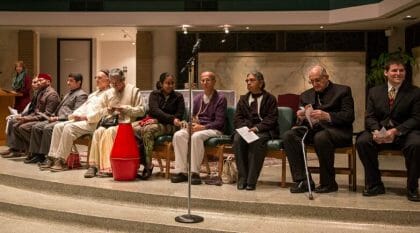 “Here in Dallas,” they write from Texas, “we held a peace march to raise funds for Syrian refugees.” “In Houston “We got together for a day of team building. With games, work groups, and so forth we learned how to be a team. On November 22 we held an interreligious prayer for peace. It was attended by Jews, Muslims, Hindus and Christians. The Archbishop also joined us.”

From California they tell us that the benefit dinner for refugees from the Middle East included a hundred people from different cultures and Churches. After praying for the victims of the terrorist attacks in Beirut and Paris, some young people presented several of their projects for refugees, from around the world, which are connected to the United World Project, an international platform for providing visibility to small and large-scale projects. Everyone agreed that through dialogue everyone can sow hope in their own corners of the world. A benefit dinner will also be held in San Francisco in December.

“From October 30th, at Centro Luminosa in Spain, a community prayer service will be held every Saturday evening, animated by different groups of people each time: youth, families, priests. . .) It will be the starting point for becoming more actively involved in concrete efforts for peace.
There was a very energetic response from Bahia Blanca, Argentina, following the November 20th event in the Square. The idea was to invite everyone – absolutely everyone – to learn more about building peace. The launching of the event which was covered by a local radio station, was then broadcast on social media. At 19:30 the Square began to be covered in colour and music. Banners, posters and fliers offered ideas on how to resolve conflicts through dialogue and thus generate peace: giving a smile, discussing without shouting, doing to others what you would have done to you, and so on. On stage there were songs, brief presentations and dances (one choir offered to sing because of an invitation on Facebook.) “The experience of today is only a first step, which confirms that when you are together small things become powerful. And so it is urgent that we get moving beginning with our daily life.” In Parana, Argentina, the local community organised two ecumenical evenings of prayer for peace and for the persecuted because of their faith, animated by members of the different Churches with whom they are in contact. With testimonies of refugees and the families that took them in, besides the heartfelt prayer, they wanted to give visibility to the amount of road we have already covered in learning about, welcoming and including others.

From Tokyo, Japan, they report a large sum of money that was gathered at the “Syrian Cafe” (a place for encounter and dialogue), which will be sent to Damascus. And we add that in Asunción, Paraguay, on December 18-20 there will be a camp for peace, organised by Teens for Unity, one of the junior sections of the Focolare.