In India with the Swadhyaya Movement 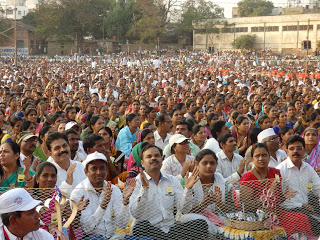 The city of Kolhapur hosted the meeting with some 50 thousand members and sympathisers of the Swadhyaya Movement which was founded by the Hindu reformer Pandurang Shastri Athawale and is currently guided by his daughter, Didi. A harmonious blend of ideals and intentions was born from the friendship between Didi and Chiara Lubich that grew over the years and continued with the election of Maria Voce Focolare president. Following the meetings between the women who succeeded the founders of those two movements, Maria Voce, Jesús Morán and the delegation from the Movement in Italy were invited to take part in the closing ceremony of a pilgrimage with some ten thousand couples from the Swadhyay Parivar Movement. The couples, who have been involved in the Hindu renewal movement, spent a week in contact with other families from the Kolhapur region sharing with them the ideals and spiritual life of their movement and paying a visit to the important temple of that region. 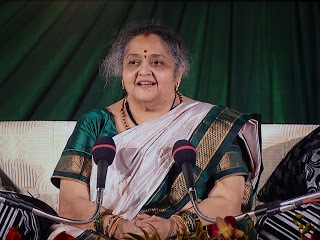 At the ceremony, which was held on a large plaza in the centre of the city, Didi Talwalkar told everyone about her friendship with Chiara Lubich, presenting Chiara as a Catholic leader and foundress of the Focolare Movement. Following a projection of photos showing the deep relationship between the two women, Maria Voce was asked to offer a greeting and the blessing of Chiara in the spirit of dialogue and shared membership in one human family as is written in the holy books of Hinduism like the vasudhavaiva kutumbakan. It was a very intense spiritual and emotional moment which strengthened the bond between the leaders of the two movements.

The journey of these years has been a new experience of dialogue among the different relgions of India and Christians in the light of the spirituality of unity. It has been an experience of deep brotherhood at a living, but also intellectual level with valuable social projects. It continues to open paths of dialogue and knowledge of each other’s faith, in the light of the charism of Chiara Lubich, seen as a woman who knew how to read the signs of the times and who knew how to offer the world a spirit that could join everyone in a journey towards the Truth.

The dialogue with Maria Voce and Jesús Morán during the February 13th telephone link-up ended with a question: “In the vast Hindu world where Christians are barely 2% of a population that exstends beyond one billion, what kind of impression does that leave you with? The Focolare president answered: “[It leaves me with the impression] of a small but alive Church, very alive.” “India is a large gift,” the co-president added. “They are very in favour of pluralism, and live it in an inclusive manner. They make space for each person to express their faith explicitly. This is a gift for the West, which lives pluralism in an almost excluding manner. Another thing is silence. Silence is necessary for every type of dialogue. Without interior and interpersonal silence, dialogue doesn’t have stand a chance.” Maria Voce concluded: “And this silence expresses the religious soul of the Indian people. As they said themselves: the gift that they can give the West is to make it rediscover the sense of God, sensing, feeling God.”

See also:
In India: a dialogue of hearts and minds