The Gospel lived: fragments of fraternity 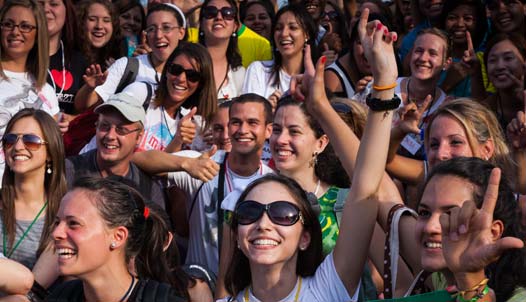 “Reinhard from Austria, aged 55, tells us his experience: «A few years ago – during my work shift at the post office – I was stabbed by a youth suffering from psychic problems: I had 27 stab wounds. The young man only stopped when certain I was about to die, I looked him in the eyes and said: “I forgive you.” It was only then that he let the knife in his hands fall to the ground. The psychologists sustained that I had not suffered any trauma. They had to operate on me and I lost a lung and can walk with the help of crutches, but I am miraculously alive. Today, many ask me to talk about the incident and why I forgave him: teachers, priests, young people, Christians, Muslim and atheists. I have met around 2,000 people as of now, and every time I can’t help but speak about the art of Loving, because for years, including that fateful day, every morning I launch the love dice. Many young people, after the meetings, tell me they want to know more about this lifestyle. Every time they invite me, it is a marvellous occasion to spread the ideal of fraternity, the Golden Rule, in the region of Vorarlberg where I live. An atheist boy, some time ago told me: “You know, I’m not interested in religion, but your way of living interests me a lot!”.” (Feldkirch, Austria )

“One evening, we spoke with Lina on the phone. She was our friend who lives in Damascus (Syria). She told us about the difficulties of living in a warring environment: the risks due to the frequent explosions of mortar shells; difficulties arising from lack of food, water and clothes, the continuous lack of electricity and heating… in short, she did not ask us for anything. But upon hearing her words, we felt deep inside that though far away, we had to do something! We immediately shared this idea with other friends… Right away, we were surprised how many things started arriving…. They gave what they could! Families, young couples, adolescents, children, communities, parishes, other associations….Without realising it, a competition of love had begun. For example, a lady sold some gold trinkets and gave us the money. A boy who had celebrated his birthday had asked his guests, in place of birthday gifts, to contribute for his Syrian brethren. A family shared its life savings because “we were keeping them for special occasions! And helping someone is one of them!”… So in a short time, we collected €20,000! With this sum we managed to help many Syrian families in need, bringing them food, clothes, the basic necessities… but above all, we brought them a hug as big as the world, making them feel that they were no longer abandoned, but part of a huge family!” (Rossana and Emanuele, Italy)