From the Focolare Community in Athens 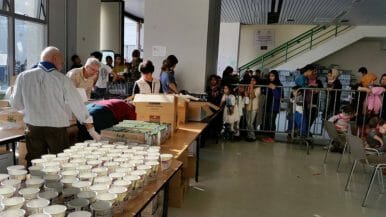 The flow of refugees has not stopped for months. They are living in a state of emergency on the islands of Lesbo, Kos, in Athens and in Idomeni. There are many secular and religious associations – Orthodox, Catholic, Protestant – and the NGOs that have never ceased to be there with help and assistance for these suffering people. The local community of the Focolare Movement, although small, both in Athens and in Salonica (Greece) has opened its arms and heart collaborating with several associations, including Caritas, The Pope John XXIII Community and others. 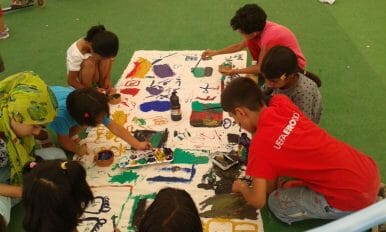 “Particularly in Athens,” they write, “we went to several refugee camps that are opened and closed according to the influx of arrivals. We have involved friends and colleagues in a food and clothing collection campaign to distribute to the different welcoming centres. From Salonica every week a group from the Focolare community in collaboration with Caritas, travels to the outskirts of Macedonia with relief and emergency aid.”

“I went with some of my friends and colleagues from work to one camp where between 500 and 1000 people arrive each day,’ writes Mariangela from the focolare in Athens. “We help with the distribution of the meals, the sorting and mending clothing and play with the many, many children. We’d want to be able to say something to them, to share their burdens, but the language prevents us. The only way for us to communicate is with a smile, a caress and concrete deeds. In the end you feel like you’re able break through. It all seems so little in this sea of desperation, but we try to give at least one drop of love.” 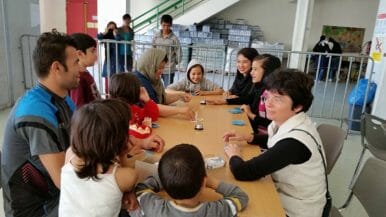 Maristella Tsamatropoulou, works on the National Greek Caritas Team: “The current refugee crisis doesn’t but expand the landscape of assistance that Caritas already began, to alleviate the Greek socio-economic crisis.” She explains, “It’s a matter of humanitarian aid that sees to the distribution of meals, of basic needs, both on the islands where the mass gatherings require it. . . but then the hospitality in hotels where there are the very important child care workers with their programmes for children, psychologists and the possibility to bathe. The different programmes that are structured and supported through foreign financing would never be able to carry out their work without the chain of solidarity that involves the efforts of so many volunteers on the front lines and on the back lines (the ones who make the appeals and collect the items).”

At a pastry shop bar in Syros, the owners have involved their customers in gestures of solidarity such as collecting medicines, clothing and food, along with “A coffee waiting. . .” deal that allows you to leave a coffee for someone who is unable to pay. At Christmas, 235 people arrived! Some bread shops have begun “a loaf of bread waiting” in their businesses.

“We’re so struck by the generosity and solidarity of the people,” they write from the Focolare community. “In spite of the serious financial crisis, the Greek people are pulling out all of their fraternal power, towards the poorest, finding unexpected energy and crativity to lift up so many people. It’s a true lesson in being human!”