City in Dialogue: Networks of light to inhabit the planet 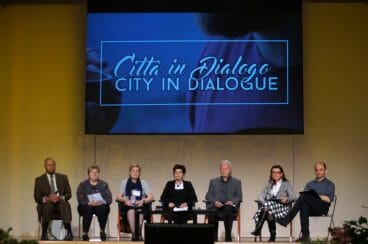 The line is long and quite boring. People of all ages from many parts of the world are patiently waiting for lunch as they share their thoughts and opinions about the morning. The first session of the OnCity – Networks of lights to inhabit the planet Conference has just concluded. The conference took place on April 1-3, 2016 and really showed the many lights that have been lit up in our cities. “Rather than dwelling on an analysis of the darkness,” says Lucia Fronza Crepaz who is the moderator, “we’ve decided to turn our attention to the dawn, to the rising sun.”

OnCity is organised by the New Humanity Movement, Youth For a United World, and the United World Project which are Focolare agencies actively engaged in building a more united and fraternal world at the social level, amongst young and old and through support and development projects.

Certainly the current news stories constantly cry out to us : bombings, terrorism, new forms of marginalisation and poverty, piecemeal wars. Our cities are experiencing problems and contradictions in front of our very eyes. But there are also very positive and well-established experiences which confirm that it is possible to work, to hope, to believe in a more supportive and fraternal city that would be more liveable for everyone.

With this awareness the organisers set out to create a three-day event in which the nearly 900 participants would be given the opportunity to experience a new kind of city life with one another, that could be taken back to their home environments. It was an opportunity to examine the topics of solidarity and fraternity in order to be be able to interpret the changes we see taking place in the cities where we live, and to learn a lifestyle based on dialogue.

OnCity played out in three plenary sessions, thematic seminars and a good 32 work groups which were useful for coming to an understanding of their ability to be active, creative and responsible citizens.
Forty six presentations were squeezed into those days with the purpose of valuing and appreciating the networks that already exist and encouraging new ones where needed: starting up “cells of brotherhood” wherever we are.