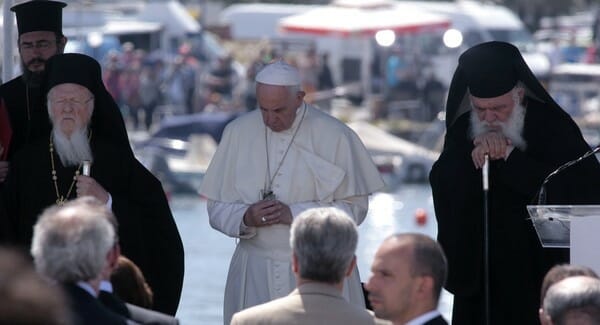 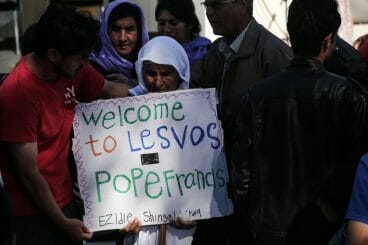 Pope Francis visits the Refugee Camp of Moria, in Mytilene, Lesbos, on April 16, 2016

Pope Francis called it living Ecumenism and sharing one another’s pain, as he spoke to journalists on the outward flight from Rome. He called the refugee crisis the worst humanitarian disaster since the Second World War. The April 16th visit to the island of Lesbos was marked by sadness. After the EU-Turkey Agreement the Moria refugee camp seems more like a prison camp surrounded by protestors and indignation from humanitarian organisations. In the arms of Francis, Bartholomew and Ieronymo, the outcasts of history, the throw-outs of political decision-makers, the refugees have become the centre of the world. “Anybody who is afraid of you has never looked into your eyes,” Bartholomew stated with emphasis. “Don’t give up hope!” was the message that the Pope wished to leave the refugees, “The most beautiful gift we can give to one another is love: a merciful gaze, an eagerness to listen to and understand one another, a word of encouragement, a prayer…”. 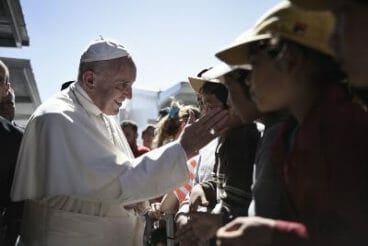 There was nothing but gratitude for the Greek people, expressed in different ways by the three religious leaders: In a moment of great difficulty caused by the serious economic crisis, the people still find the way and the heart to embrace those who flee to a better future. They expressed equal gratitude towards the many volunteers who showed up from all parts of Europe and around the world. Originally from South Africa, Pauline, from the Focolare Movement, has been living for many years between Athens and Lesbo. She repeatedly witnessed the landings of the refugees and helped to rescue them: “The Pope has also sent a political message at the border openings. I wonder why he didn’t go to Idomeni. Perhaps it would have been too political.” Chiara, from Pope John XXIII Association: “He said what I’ve felt for some time: Just stop classifying these people as ‘refugees’, as numbers. It’s time for personal contact, for knowing their stories, their backgrounds;” Eugenio, from the Italian Ambulance Corps at the Order of Malta, said: “I was very moved when he spoke of the children that die on the sea, because I have seen such scenes myself. I managed to shake hands with him and was strengthened for my work.” Cristina is Catholic and her grandparents are refugees that fled from Turkey to Lesvos: “It was an historic event, unimagineable on this island. It seems like a dream”.

Father Maurice is coordinator of the Jesuit Refugee Service (JRS) in Greece. He remarked: “All of it was important: the words, the gestures, the silences. All of it spoke. The most powerful moment in the ‘jail’ was the personal contact the Pope had with each person” “A common message was sent to the refugees,” the Jesuit went on to say. They are mainly Muslims discovering a land of Christian origins. Therefore it matters that they see the unity of the Christian leaders and the closeness that these leaders wish to give a witness of.” “Moving. And very important from the ecumenical and political point of view, because of the meeting with Prime Minister, Alexis Tsipras,” said Vasileios Meichanetsidis from Apostles (an NGO from the Greek Orthodox Church). “The Pope recognised how much the Greeks had done, and the Greeks gladly welcomed him.” 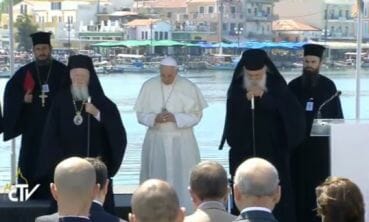 “We’re all migrants,” the Pope went on to say during the prayer at the port of Lesbo where, as at Lampedusa in 2013, he left a wreath of flowers on the surface of the sea.

What is being expected of the political world? “It would be a matter of further stronger appeals especially toward Europe to consider the matter of the migrants and of the refugees not only in terms of internal politics or emergency, but as a new front on which the future of the continent comes into play along with its credibility in terms of its claims of principles and concrete politics,” said pasquale Ferrara, author of the recent book, Il mondo di Francesco. Bergoglio e la politica internazionale. Ferrara is a member of the Abba School for the field of political science and was the Italian Consul to Athens.

“The Pope didn’t go there on a humanitarian mission, but wished to underscore this profound dimension,” Ferrara continued. “And the fact that he did it in an ecumenical manner was an even more powerful sign; almost like saying the politics isn’t managing to solve this issue, so we join the game, not as substitutes, but to underscore that this must be a point of priority on the world’s political agenda. The fact that the refugees brought to the Vatican were all Muslims underscores that ISIS is not only exterminating Christians. It is not a problem of religion, but of ending a war, all wars.”
Joint Statement