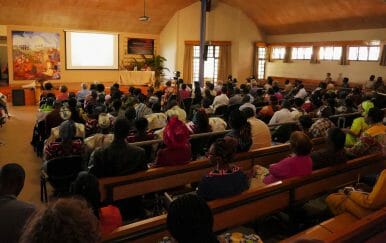 “In our culture,” recounts a Congolese husband after 14 years of marriage, “the first child should be immediately conceived. If after six months a woman still has not conceived, the husband’s family subjects her to stress.” “This is exactly what happened to me – his wife continued. We were already giving half of our salaries to my in-laws who were already in their old age and could no longer work, but this didn’t suffice. They wanted us to have a child who would carry on their lives even after they died. Since nothing happened, my mother-in-law wanted to convince me to go to the quack doctor, and seeing my reluctance, started putting pressure on my husband to ask for a divorce. But he was determined, and though full of respect, told them clearly that he did not give in to their demands because he loved me, and having been married in church, our marriage was “for always.” After three years we decided to adopt two boys, and after 12 years, thanks to a treatment I had in South Africa and our faith in God, we were able to have a daughter, and three months ago, a boy.”

“Also my wife,” another Congolese husband continued, “had problems in conceiving. She managed to get pregnant but after a few months would lose the child. Our neighbours said all sorts of things, accusations kindled also by my aunt who did not like my wife. My family had even suggested we make a traditional sacrifice to our ancestors. We explained to them that as Christians, we are not against traditional rites since also in traditions do we find the seeds of the Word, but that we firmly believed in God’s help. One day, a friend of ours, a university professor came to visit, and hearing about our problem, gave us some precious suggestions on how to help the pregnancy progress. Precisely in those days, my wife was five months pregnant, and thanks to his suggestions, her pregnancy continued up to the birth of our child. The same thing happened for the other five children who followed later.”

“Upon concluding my studies, “André says, “I found a job in another city, and before leaving, the family got together to give me all the advice they thought I needed. Among these, was that of marrying a girl of my own tribe. I didn’t agree. We had always thought I would marry the one God had planned for me, regardless of where she came from. When I fell in love with Julie, I did not know that she was from a tribe that fought my tribe. I learnt about it later, and it was then that I remembered the instructions of my family. After considerable thought, I understood better what it meant for me to live the Gospel, that is, to succeed in seeing every neighbour not as an enemy, but as a brother, since we are all children of the same Father. So I decided to stick to the principles God had sown in my heart. During our engagement, serious clashes sparked up between our two regions, but Julie and I, despite those difficult times, continued to nurture our relationship until we got married. Our neighbours were certain that our marriage would not last more than six months.”

Julie confided: “Even I doubted it would last – but then I saw how faithful André was to me and even if we had different characters, nutritional habits, and mother tongue, we continued to love each other. This year, we celebrated our 23rd wedding anniversary with our four sons.

“From the start, each of us had undertaken the commitment to make the other’s family our very own,” André continued, “and with time we managed to get closer to those relatives who initially countered our marriage. In our tradition, giving one’s own name to a child was a demonstration of affection one has for him, a way of immortalizing oneself in him. Julie wanted our sons to have the names of my relatives. With this gesture, also she has been immortalized in my family.”