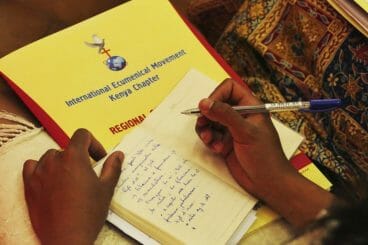 Dialogue between members of two ethnic groups in permanent conflict is what Johnson Duba, a young man from Marsabit, in northern Kenya, works hard for. He often succeeded in persuading the village elders to come together in a spirit of dialogue in order to restore peace in the community. When it came to young people, however, his attempts to unite them came about through sport. He initiated a football tournament, where nobody actually wins, in order to strengthen peaceful cohabitation. It is one of the fruits of reconciliation brought about by living the charism of unity which Johnson has always tried to live in his village. His was one of the experiences presented on May 27th to the delegates of various Churches from Eastern Africa and from Europe gathered for the International Ecumenical Movement Kenyan Chapter (IEM-K).

Among the guest-speakers were Rev. Dr Samuel Kobia, former General Secretary of the World Council of Churches, and former president of IEM-K, as well as Maria Voce, President of Focolare Movement who was visiting Kenya from 14 May to 1 June. 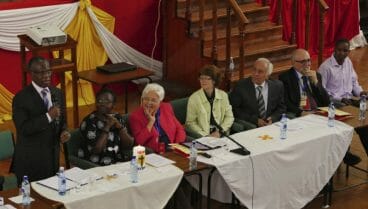 “The Focolare Movement is ecumenical by nature,” stated Rev. Dr Kobia, emphasizing his good relationship with Chiara Lubich, whom he met in person, and with the Focolare community. In his talk he stressed the importance of forgiveness saying, “We do not want to be imprisoned by the past because you can easily remain a captive of history (…) but we should deal with the past in a way that we will not pass bitterness and anger to the next generation.” He urged the Ecumenical Movement to support projects of peace, dialogue and reconciliation promoted by their governments.

Moreover, in the heart of Chiara Lubich was a burning desire “to respond to the most urgent and dramatic needs of humanity, the need for peace,” recalled Maria Voce in the preliminary part of her speech. “And so,” she continued, “we started setting up places and looking for opportunities to meet within our Churches, so that there could be more and more ‘communion’. We had the experience of being a united people made up of Christians of different denominations through the sharing of the specific gifts of each Church, in the hope, one day, of also reaching doctrinal unity.” 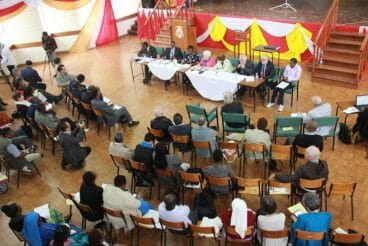 Dialogue, therefore, is the privileged pathway to be undertaken. This has been the experience and reflection of the Focolare Movement which has matured over these 73 years: “… a dialogue of life, which does not create opposition among people, but rather brings people of different traditions or faiths together, enabling them to open up to each other, to find points in common and to live them together.”

Recalling that unity (Jesus’ prayer “That all may be one’) is the specific aim of the Focolare Movement, Maria Voce confirmed that dialogue is a way of life, a new culture, which the Movement can and would like to offer to men and women of today.

She concluded by saying, “The Holy Spirit, the bond of love, will help Christians understand that they are living a precious and important time: a passing from darkness into the light of the resurrection, towards a greater fullness, in which diversity means enrichment and the opportunity to create communion: where the wounds of one will be the wounds of the others; where all together, with humility and detachment, we will try to find the essence and the origins of the one faith in Jesus, by listening to His Word”.