Chiara Lubich, the Love of Neighbour & the Works of Mercy 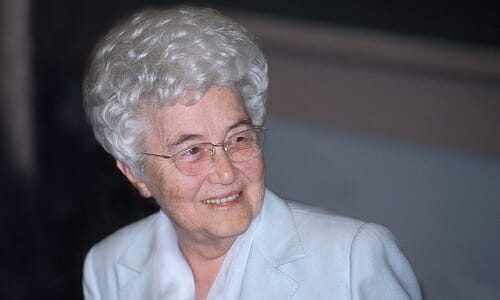 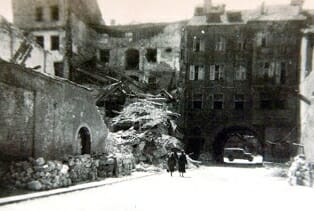 “Ever since the beginning of the Movement, especially because of the sad circumstances of the War, Chiara and her companions were very attentive to the poor of their city, taking them into their house, visiting them, providing them with the basic necessities and assisting them in many other ways. Through this loving exercize toward their neighbours who were in need, they later realized that their heart shouldn’t only be turned towards the poor but towards all people without making any distinctions. (…) Chiara mentions the works of mercy in several letters, which she wrote in those early days to people who had drawn near to the Movement. We present a letter she wrote to her friend Anna, inviting her to live out the works of mercy that God puts before her in every moment of the day. “Remember that at the end of life you’ll be asked for the 7+7 works of Mercy. If you did them, you did everything. And I’d like you to join us in living the present moment and, in the present moment, the work of Mercy that God requires of us. Do you study? = You instruct the ignorant. Do you tutor a classmate? = You counsel the doubting. Do you eat or give food to others? = You feed the hungry. Do you drink or give someone a drink? = You quench the thirst of the thirsty. The 14 Acts of Mercy should determine each of your actions. And each of your actions should be turned towards Jesus who should live and grow in you and in your neighbour.

Mutual Love, the Pact of Mercy and Pardon

Jesus’s new commandment: “Love one another as I have loved you” (see Jn 13:34), which highlights what is specific about the interpersonal relations of Christians and the ultimate goal of mercy, is another cardinal point of the spirituality of Chiara Lubich. Mutual love lived out with an attitude of being the first to love, of free and unconditional self-giving one to the other, was what characterized the life of the first focolare. Chiara herself described its radicalness, when she spoke to a group of Muslim friends about the Pact of Mercy. (…)

On other occasions Chiara reiterated the opportuneness of this practice, underscoring the value of pardoning, and describing it as a real act of freedom: “Pardon. Always pardon. Pardon is forgetting, which often means not wanting to look at reality in the face. Pardon is not weakness, that is, not taking into account a wrong for fear of the stronger one who committed it. Pardon doesn’t consist in carelessly signing on to what is wrong, or in calling good what is evil. Pardon is not indifference. Pardon is a lucid and willful decision, an act of freedom therefore, which consists in welcoming our brothers and sisters as they are, in spite of the wrong they have done, as God welcomes us sinners in spite of our defects. Pardon consists in not responding to an offence with another offence, but in doing as Paul says: ‘Never let yourselves be overcome by evil, but overcome evil with good.’ Pardon consists in opening the possibility of a new relationship with you to anyone who has done you wrong, the possiblity therefore for you and him to begin life again, to have a future in which evil will not have the last word. (…)” Chiara returns to the topic of this relationship that we should have with every brother and sister, specifying the need of starting over: “Perhaps that brother – like all of us – has commited errors, but how does God see him? What really is his condition, the truth of his state? If he’s right before God, God no longer remembers anything, He’s already cancelled everything with His blood. And we, why should we remember? Who is in the wrong in that moment? I who judge, or my brother? Me.”

And so I have to move myself to seeing things from God’s eyes, in the truth and accordingly with my brother, because, if for misfortune he is not yet right with the Lord, the warmth of my love, which is Christ in me, would lead him to contrition as the sun heals and absorbs and heals many wounds. Charity is maintatined with the truth and truth is pure mercy, with which we must be clothed from head to toe so that we can call ourselves Christians. Does my brother or sister return to me? I must see him new as if nothing had happened, and begin to live with him again in the unity of Christ like at first, because there is nothing anymore. This trust of mine will keep him from other falls and I too – if I have used this measure with him – will be able to hope that God one day will judge me.”

Part 1: Mercy in the Spirituality of Chiara Lubich