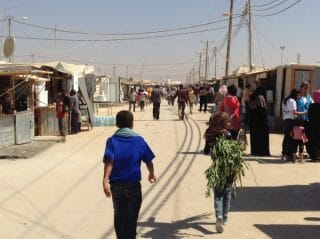 A letter from Amman, Jordan, signed by Wael Suleiman, Director of Caritas Jordan, who oversees the arrival of refugees from Iraq, Syria and Paletsine: “Life has no sense anymore for the people in the Middle East. Darkness everywhere. Fear. Death. Hatred. Refugees. Camps. But the ideal that keeps us going, in spite of it all is the daily discovery of God who is still there, who is still Love and loves us immensely and that love is still stronger..”.

This is the strong belief that keeps the Director of Caritas Jordan moving. And his faith is accompanied by action, the daily efforts of many volunteers, as well as the outside help that comes from several international projects. Among them is “HOST SPOT” proposed by New Humanity, an NGO, with associates from 9 European and Middle Eastern countries for spreading a culture of understanding and the promotion of human rights. On August 7 – August 19, 2016 a group of young people from different countries will go to volunteer at welcoming centres in Jordan. The experience will give them a face-to-face encounter with what refugees face each day.

The young people are from all backgrounds and are prepared to acquire the necessary knowledge and skills that will enable them to engage in the production of documentaries that tell the real life stories of the refugees and promote freedom of expression. The project includes a meeting with  refugees who are fleeing the Syrian and Iraqi conflict and seeking refuge in Jordan.

HOST SPOT is financed by the European Community Erasmus +. The name plays on the European notion of a ‘hot spot’ as a point of arrival where refugees can be welcomed. The word “SPOT” stands for the short commercial-like television or radio spots that will be part of major television and radio programming, and the production of a major video.

After Jordan, a training course is planned for Turkey in October 2016. It will offer training in journalism and storytelling for the promotion of human rights and, in particular, freedom of expression. A further course will be held in Germany in March 2017 for developing basic technical production skills for social documentaries with live filming. There will be opportunities to meet the refugees in the German refugee camps and compare different approaches and systems for welcoming them.

The project that underscores encounter and reciprocity hopes to document and film the personal stories and daily life of refugees in the camps, providing the public with more information for understanding the refugees, and for informing their conscience.