“Here I learned how to dialogue with my children, and I shall surely return to know more,” remarked one of the mothers dressed in a sari. One of the fathers said, “I have decided to dedicate more time for my children.” The comments came from two of the 60 participants attending the course on parenting held at Udisha, which was entitled: “Children – the future of our nation”. After school, in the same facilities, their children are given a snack, toys and after-school activities. For some of the parents, the themes dealt with were a surprising novelty, while for others they were eye-openers to their own mistakes and the dangers and risks to which their children are exposed. But the course was not the only a promotion addressing the parents. 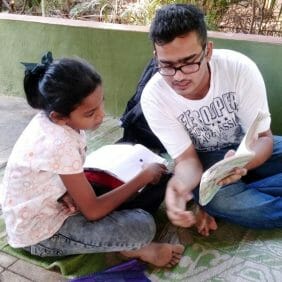 In this 5th year of Udisha – one of the social projects of the Focolare for disadvantaged children, teens and families – there is also the opportunity to obtain a microcredit, thanks to which the economy of many families has decisively improved. Especially the women have gained access to an initial subsidy and many have been able to open small handicraft or business activities such as the production of crochet bags or selling cooked food. Already 52 mothers hold monthly group meetings to share their entrepreneurial experiences and solve some common problems together. Other successful activities this year was the prophylaxis against typhus, which was beneficial to 107 children and adults, and 72 adults and 95 kids were vaccinated against German measles.

But the greatest efforts of the project addressed the kids who were involved in new activities. Independence Day on 15 August was celebrated with the flag-raising ceremony, accompanied by patriotic songs and poems. In September instead, on the occasion of the Bandra fair  – one of the city’s most important events – children and parents had a field trip to the Mount Mary Basilica. Also in September, India celebrated teachers’ day and the children once again thanked their educators with a song, dance and theater performance. 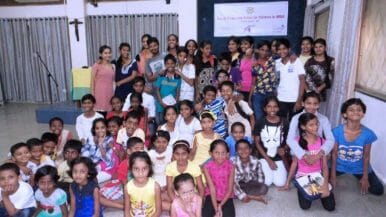 On 2 October, feast of the father of the nation – Mahatma Gandhi – the celebration started with the thoughts of Gandhi on nonviolence and peace, and reflections on the poverty of many children living on the streets and the importance of sharing. Despite their extreme poverty,  also the Udisha children wanted to share the little they had: some clothing item, a small toy, or some sweets. And discussing among themselves, they also listed many other things to share: their ideas, joy, and smiles.

The Diwali (Feast of Light) is India’s most important feast that takes place for four days between October and November every year – during which the children of Udisha used all their creativity in painting terracotta vases and drawing pictures with coloured powder. It was their way of contributing to the project, mostly through a distance-financing from a nonprofit AFN organization.  The intensity with which the children of Udisha absorb the “culture of giving” is really impressive. This inspiring idea is the core of the project and education they receive, and a value that is conveyed to them not only through words but through the concrete love of the volunteers onsite, and those across the ocean, whom they have never met but who care for them.