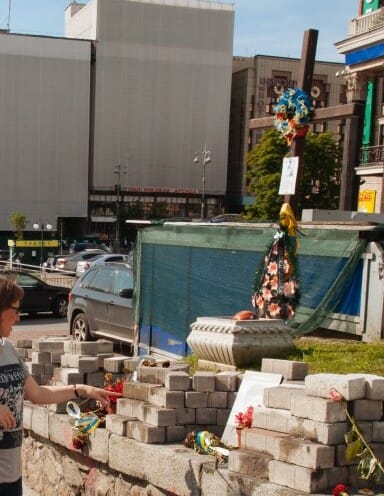 From the end of 2013 when the brazen unrest began in Kiev, by April 2014 during the Ukrainian Revolution the situation was unchanged. The scene was being described on the front pages of all the local newspapers, but now the media no longer talks about it. But the violence continues to paralyze the population that is struggling under such dramatic living conditions.

There are small Focolare communities in Ukraine, in Mukachevo, Lviv and Kiev that are trying to respond to the evil all around them. In recent months there were several trips and visits to small Focolare groups in Slovakia at the capital of Kiev and in Kharkiv in the northeast.

“With the exodus of the working-age people, the elderly are left in families, perhaps with parents and children of different ages. These children are “social orphans” as descirbed by His Beatitude Svjatoslav Sevcuk, Archbishop of the Greek Catholic Chuch: “they know what a family is only from the internet and, in the future, they’ll never  know how to creat a real and healthy family.”

The Catholic Church stands among those who are courageously trying to provide humanitarian assistance through Caritas and Religious Institutes. Thanks also to repeated appeals from Pope Francis – the most recent on April 3rd – it has been possible to give legs to a network of assistance for the hardest hit groups that has been gratefully acknowledged by civil authorities, with meals for the poor, rehabilitation centres, homes for teenage mothers and their children born of the violence. The work of the Sisters of Don Orione is significant in this regard; they have set up a house in which to care for them.

The Focolare also tries to express its closeness to the Ukrainian people with whom they are in contact through their communities in Slovakia. Recently, in May, one group from Slovakia went to the capital in Kiev to meet with families and others. “Going to the places where the revolution happened two years ago, is always moving. It’s now part of contemporary Ukrainian culture. There are the names of the people who died during the battles at Maydan Square, or the people who died in the war in eastern Ukraine (that is still waging). The people are proud of them,” they write when they return. “We had many conversations about so much pain and fear that is being carried together. . . This is how the people try to put into practice the invitation of His Beatitude Svjatoslav Sevcuk: “We are in need of families that are ‘healers’ for our families.” 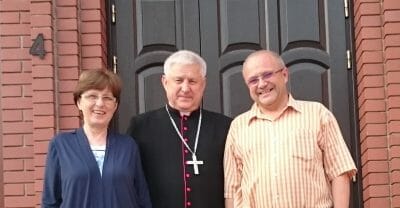 “At the beginning of this year Father Anton Konecny from the Focolare was transferred at the request of the Bishop of Mukachevo, Ukraine, Antal Majnek, from his diocese in Kosice to a parish in eastern Ukraine. His presence and service contributed to developing relationships both inside the parish as well as at the ecumenical level and with local civil authorities.”

Elena and Martin travelled to eastern Ukraine, all the way to Kharkiv, a beautiful city with 2 million residents that was once the capital of the country before the Russian Revolution but is now showing the signs of the current unrest. Following their visit to Bishop Stavislav Szyrokoradiuk, OFM – friend  of the Focolare and for the past two years Bishop of the Diocese of Kharkiv which includes all the territories where there is fighting – they realized that the “people needed to be able to count on everyone’s support, and to know that people outside the country were praying and and making sacrifices for peace in Ukraine, just as Cardinal Parolin emphasized during his recent visit to the country: “God has not forgotten you!” .