WYD 2016 and the adventure of the youth from Verona

The five coaches of 17-year-olds left Verona for Poland, accompanied by priests, animators and families. The camp in Krakow that was awaiting them was part of the World Youth Day and had been organised exclusively for them. There were also some Gen3 in the group, enthusiastic to be able to also participate in this experience.

«The trip also included a stopover in Munich – recounted Fr. Stefano Marcolini of the Focolare, one of the priests accompanying the group – to visit the former Nazi concentration camp in Dachau. Upon returning to Munich in the evening, we decided to go sightseeing in the city, unaware that it would become the site of a terroristic attack. Thank God we were not in the vicinity of the mall where the shooting occurred, but there was such a great confusion that the entire city (the underground, bars and public places) were in a panic situation.It was really fearful and we also had a hard time gathering the group. Thankfully, we had our cell phones and Google maps. Finally at 3 am, we were able to find everyone, and were so generously helped by the local Church which offered us a substantial breakfast. We were contacted by the Local Ministry of Foreign Affairs and received the order to return to Italy, since the group was composed of minors.» 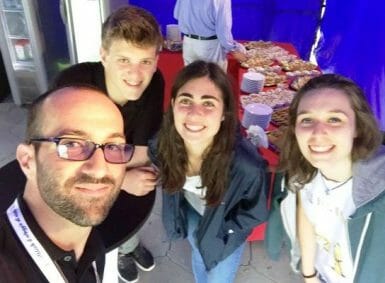 But the kids refused to be overcome, and were encouraged by the words of Pope Francis who had invited the youth to the WYD: “Don’t let anyone steal hope from you.” Upon returning to Italy, they wished to take part just the same in a camp –to do what they would have wanted to do in Krakow – and which the Bishop rapidly set up in a nice place in the mountains.

«Upon hearing about their adventure, the Pope encouraged the boys and girls not to give up and told them that all were awaiting them in Krakow. In the meantime, three of them, accompanied by a priest, were invited to Krakow for the Festival of the Italian youth.They were also chosen by the other youths to participate in the linkup with Pope Francis and address him in the Q&A session, precisely regarding the facts in Munich.»

«To respond to the Pope’s personal invitation – continued Fr. Stefano – at the end of the camp the coaches headed for Poland, where we arrived on Saturday, the 30th just in time for a private audience with him, since he had changed his previous programme. In addition, due to the great meeting on Saturday evening, where around two million boys and girls were awaited, the Verona group received passes to sit in the first row.All this happened because, as Riccardo, one of the Gen3 said, “We did not allow anyone to steal our hopes from us!”»