Gabon at an Impasse 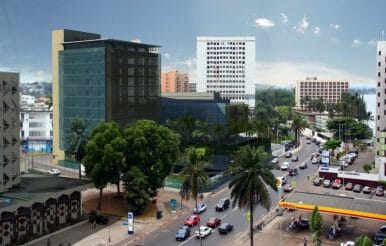 “When I was invited to visit the Focolare communities in Gabon, I searched for it on Google Earth to find out where on the African continent it was located. It’s actually a small country that is hardly ever talked about. Yet, perhaps few places on earth are so beautiful, rich in natural resources (oil, precious wood, extinct species that are still in existence, 800 km of coastland, the ocean of your dreams. . . .). That’s without saying anything about the people: more than 2 million citizens from 40 ethnic groups, Christians, Animists and Muslims, all living together in peace and – I have to stay it! – an extraordinary ability to welcome and include everyone, as I was able to experience for myself.

Currently, Gabon is in a complicated political impasse, following the elections of August 27th and an announcement of victory for one of the presidential candidates. There has been a strong call for transparency both from within and outside the country, from the international community. There is also a strong call to reveal the final election results in each of the regions – as prescribed by the Gabonaise Constitution. The majority of the population are not convinced by the results that have actually been reported, and people have poured into squares in the capital city of Librevelle and in the industrial city Port-Gentil. The demonstrations were contained and repressed with an uncertain number of deaths and many arrests.

Non-official means of communication and social networks have been blocked, making it difficult for me to receive news from my friends with whom I spent unforgettable days living the Gospel. It was they who managed to contact me, reporting that all are well and how they’re living through the situation.

“Thanks for holding us in your heart!” they write from Libreville. “Unfortunately it’s true that the country is going through violence following the elections. Tensions are high and we’ve been told to stock up on water and basic necessities, and to stay inside our homes. Supermarkets have been ransacked. The communications media is in the hands of the government, and internet is  available for only short periods of time between 8:00 and 14:00. Messaging, Facebook and Whatsapp are all blocked. There is a strong and visible military presence on the roads. Total confusion since the election results were announced in this free and democratic land.

We’re still waiting for an announcement from the Constitutional Court, with the possibility of even more disorder. People are fearful for the near future of Gabon.”

I also received news from Port-Gentil: “We’re well, thanks be to God. Internet access has been limited and complicated since August 31st. We hope it will be active again soon, since it’s such an important communication tool. Last week we were closed inside our houses, unable to go out because of the total chaos on the streets of Port-Gentil and many other places in the country. Moments like these remind of the importance of prayer.”

Before saying goodbye to each other we had made a pact, committing ourselves to be peacebuilders, builders of unity and dialogue with everyone in our own work and family environment. Now is more than ever the moment to do it with the support of many other people around the world who live and work for a more united world.”

Before saying goodbye to each other we had made a pact, committing ourselves to be peacebuilders, builders of unity and dialogue with everyone in our own work and family environment.

Now is more than ever the moment to do it. We were further encouraged by what Pope Francis said yesterday, September 11th to those who were gathered with him in Saint Peter’s Square: “I entrust to the Lord the victims of the clashes and their families. I join the Bishops of that dear African country to invite the parties to reject all violence and to always aim for the common good. I encourage everyone, particularly Catholics, to be builders of peace within the law, in dialogue and fraternity.”