Igino Giordani: The encounter that made him a new person 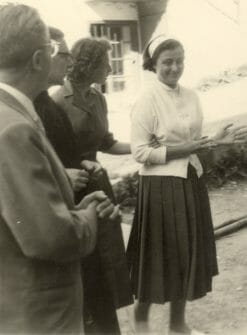 The following is recorded in the personal diary of Igino Giordani: “17 September 1948. This morning at Montecitorio I was called upon by angels: a Capuchin, a Friar Minor, a Conventual, a Third Order man and a Third Order woman, Silvia Lubig (sic!), who is beginning a community in Trent. She spoke like a saint inspired by the Holy Spirit.”

Recounting the event: “One day I was urged to listen to an apostle – as they said – of unity. It was in September 1948. I exhibited the usual courtesy of any deputy towards possible electors when some Religious came to Montecitorio, representatives of different branches of the Franciscan family, a young lay woman and a young layman. To see  a Conventual, a Friar Minor, a Capuchin, and a woman and man from the Third Order of Saint Francis all united together already looked like a miracle of unity to me: and I said so.

The young lady spoke: I was sure I’d hear a sentimental propagandist tell me about some utopian welfare. Instead, right from the first words I felt something new. A half hour later when she had finished talking, I was taken by the enchanting atmosphere: I would have liked that voice to continue on. Without realizing it, it was the voice that I had been waiting for. She placed holiness within everyone’s reach; she took away the grates that separated the lay world from the mystical life. She made public the treasures of a castle that only a few were admitted to. She brought God near: she made him feel like a Father, brother, friend, present to humankind.

I wanted to look into it: and getting familiar with the life of the Focolare of unity – as they called it – I recognized in their experience the realization of the desire that overwhelmed  Saint John Chrysostom: that the laity would live as monks,  minus celibacy. I had much cultivated that desire.

What happened was that the idea of God had yielded its place to God’s love, the ideal image of the living God. In Chiara I had found someone who didn’t talk about God, but someone who spoke with God: a daughter speaking in loving conversation with the Father.

If I did a critical examination of it, I found that I hadn’t discovered anything new. In the way of life that was opening to my soul, I found all the same names, characters and doctrines that I had loved. All my study, my ideals, the very events of my life all seemed directed to this goal. Nothing new: yet everything was new: the elements of my cultural and spiritual formation began to come together in accordance with God’s plan. They took their rightful place.

All was old and all was new. The key that unlocked the mystery had been discovered: love was allowed to pass, which had too often been barricaded: and it burst forth spreading like fire and becoming a blaze.

A collective, socialized holiness – to use terms that were later popularized by the Second Vatican Council – drawn out of the individualism that had accustomed everyone to become holy on one’s own, meticulously caring for one’s own soul, with endless analyses in order not to lose that soul. A piety, an interior life that came from Religious houses, from a certain exclusiveness of the privileged classes was now poured out into the public, into offices and factories, into houses and fields – and into convents – because  wherever you find people, you find candidates for the perfection of holiness.

And to live this new life, to be born in God, I didn’t have to renounce my doctrines: I only had to place them in the fire of love so that they would come alive. Through my neighbour I began to live God. Life became a total adventure, consciously lived in union with the Creator, which is what life is. Mary was resplendent with a new beauty; the saints entered among the relatives; Heaven became a common home. This was the discovery, this the experience. This made me a new man.”