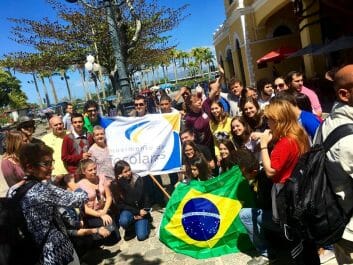 The tenth World Peace Forum and the second Youth World Peace Forum were held at Florianópolis, Brazil on September 22-15, 2016. Some events were held in common and others distinctly. The forum was attended by 1,500 adults and young people from 60 countries, different cultures and various religious faiths.

On September 22 there was a  peace march through the city streets, with adults, teenagers and children.

President of the Youth Global Peace Forum, Carlos Palma, commented: “It was very moving to see Chiara Lubich’s name written on the door of one of the halls, with the title “Peacebuilder” that had been given to her by UNESCO in 1996 for Peace Education.” 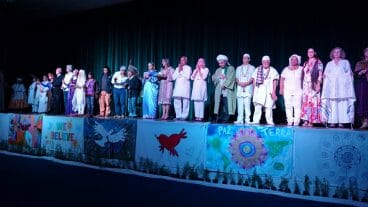 The young people’s forum was an explosion of life, with touching testimonies and presentations of their many projects and personal experiences in being committed to peace.
On September 23, an additional 500 young people from around the world were linked up via web for the World Conference of Young People for Peace, which is part of Living Peace International in collaboration with Peace Pals International (New York, USA).

The Global Peace Forum concluded on September 25 with a profound inter-religous prayer with 30 representatives from different religious and spiritual traditions.

An important part of the programme was devoted to Peace Education, during which Living Peace was presented. The presentation and history of this project, how it has spread throughout the world and its teaching method, was accompanied by a series of testimonies by Brazilian, Spanish, Paraguayan and North American young people, and others. 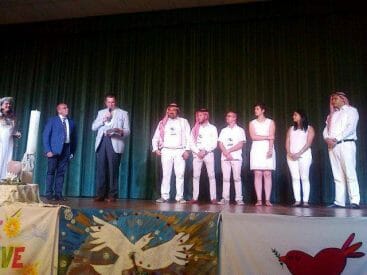 The conferral of the Luxembourg Peace Prize to the young Omar Aobou Baker from Cairo, Egypt and member of Living Peace International, was particularly moving. The next Global Peace Forum will be held in Amman, Jordan, September 2017 with adults; and another in Manila, Philippines, organized by the young people in conjunction with the 2018 Genfest.

The solemn signing of the Florianópolis Letter of Intent, titled 1% for Peace, brought the conference to an honorable conclusion. This document proposes that private and public entities destine 1% of their internal and external security spending to financing peace education projects.
Eliana Quadro, a young woman Volunteer from the Focolare in Florianópolis, received the Commandant of the Global Peace Forum Silver Medal in recognition of her efforts in producing the event.

“The Forum was characterized by the deep relationships that were created,” Carlos Palma concluded, “by the great joy in everyone’s hearts and, above all, by the immense gratitude to God and to the charism of Chiara Lubich that projects us towards humanity and makes us builders of peace and unity.”