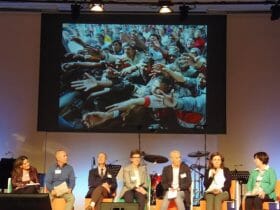 Hungary had been invaded by Soviet troops following the 1956 uprising. In response to the appeal of Pope Pius XII, Chiara Lubich wrote a letter that became the Magna Carta of a new calling in the Focolare Movement: the Volunteers of God, men and women who live the spirituality of unity and  are especially committed to bringing the presence of God into society.

Last October, a total of 1,840 participants from the  wale of Italy, came together in Castel Gandolfo, Rome. “There’s a lot of desire to step up for our country, to overcome the fragmentation and to create a network of best practices that can provide mutual support. Now, it’s more necessary than ever before to give an intergenerational concrete response to the challenges of those that suffer in society.” This was the comment of one of the young participants that summarizes the three days of intense work.

Focolare Movement president, Maria Voce, sent a message at the opening of the meeting in which she encouraged them to bear witness to the charism of unity in its more concrete expressions, keeping their gaze fixed on Jesus’s prayer “that all may be one” (Jn 17:21). The meeting continued with a series of reflections and testimonies on the central theme for the entire Movement this year: “Jesus Forsaken: 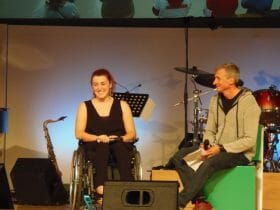 The testimonies were very moving. The voices of Pina and Tanina trembled as they told about their daily acts of heroism welcoming the thousands of refugees that have disembarked at the small island of Lampedusa in recent years: “We feel that these African brothers and sisters are our own until the time comes when we have to let them go. When they leave and disperse to many parts of the world we’re filled with emotions and concern for what still awaits them.”

Journalist Riccardo Balaarm told how the painful experience of his disabled son led to a commitment among the National Paralympic Swimmers to promote the testimony of free swimmer and silver medallist Arjola Trimi from Rio, Brazil. 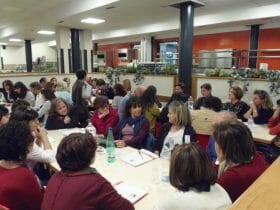 In the afternoons 150 groups discussed 35 topics: formation, social and political involvement; economy, health and ecology; art etc. These are all things that the Volunteers are called to deal with in their daily lives, through which they strive to fulfil their vocation as “first Christians of the twentieth century” as Chiara Lubich liked to call them: lay men and women that live the Gospel with the same fervour of the first Christians, committed to spending their lives for the building of a united world (Jn 17:21).

A solemn moment was the signing of the act of initialization of the promotion of the Canonization Process for Volunteer Domenico Mangano from Viterbo, in the presence of Fr Andrea De Matteis, Vicar and Chancellor of the Diocese of Albano.