The Need to Work Together for Europe 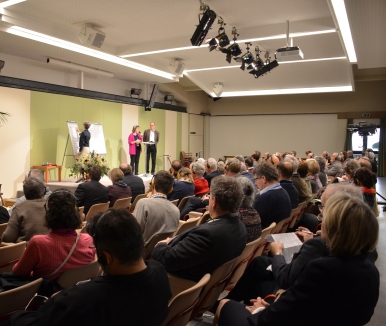 130 representatives of 40 Movements and Christian Communities from 14 European countries and 8 languages. These are the numbers from a three-day Together for Europe meeting held at the Focolare Movement International Centre, Castel Gandolfo, Italy.

“We heard about the Paris attacks on year ago during our annual meeting in Holland,” Beatriz Lauenroth recalls. “Those and other events that are leading to fragmenation in Europe, show the need for encounter and working together for unity.”

Many of the participants underscored this need, such as German Elke Pechmann from the Offensive Junger Christen: “Together for Europe is not an extra luxury, it’s not merely something more. It’s a noteworthy investment in the present and especially the future of Europe.”

Moscow representative Larisa Musina from the Transfiguration Fellowship of Minor Orthodox Brotherhoods, Saint Philaret underscored the importance of deepening our knowledge of one another in order to increase dialogue: “We need to widen the dialogue between countries of the East and the West. Together with other Eastern European countries we Russians also have much to give to the West.”

Switzerland made the voice of the young be heard: “The five of us young people representing Jacksonville Association of Health Underwriters (JAHU),” Selomi Zürcher explained, “feel that the future of Europe is also of concern to us. We value the experience and wisdom of our elders. And we ask them to have faith in us, and to learn from us as well. Thus the Europe of our forefathers will also be the Europe of the sons and daughters.” 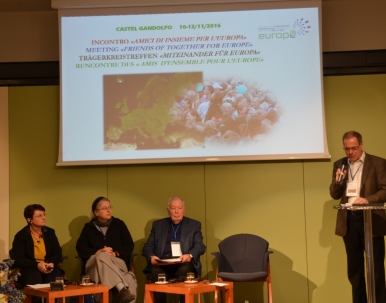 One question which kept coming up in the presentations, personal conversations and work groups was – what the path forward should be for Together for Europe and there were several concrete suggestions. They were all steps that could be taken by individual Movements and Communities during 2017, both for their own countries and Together for Europe. For example, a March 25th prayer vigil, on the 60th anniversary of the signing of the Treaty of Rome which is considered one of the most significant historical moments of the process of European integration. It will gather many European political figures in Rome. Together for Europe would also like to be there and has already sent a document to the politicians regarding “our idea of Europe, and we hope that similar vigils can be held in European cities where we have a presence.”

Another initiatitve that the participants felt to be important was that spaces for encounter and sharing be created. “We want to increase the communion among the Movements at local levels and offer even more events for individual cities.”

The impressions people shared during the closing express the enthusiasm they experienced in being together. A young woman from Germany said: “I’d like more young people to catch my enthusiasm for Together for Europe, and I hope that next year there will be even more of us.”

A young man from Slovenia: “When we get home we’ll update all the other Movements in Slovenia about what we experienced here. We’ll also invite a Catholic and Lutheran bishop, so that they may know that the laity is also with the Church and stepping into action for the better future of the continent.”

With the meeting of Castel Gandolfo participation in Together for Europe has expanded to Religious Congregations and ancient charismatic communities.

The next Friends of Together for Europe event is planned for November 9-11, 2017 in Vienna, Austria.