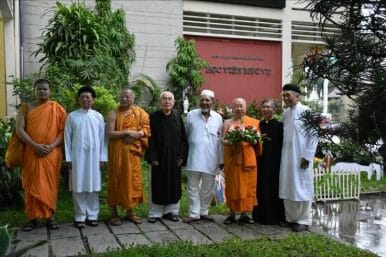 «These were days of ‘fire’, with the three monk-friends coming from  Thailand: Phramaha Thongrattana Thavorn, Ajarn Suchart Vitipanyaporn, Bhikkhu Jayabhinunto and Mr. Khamphorn who accompanied them», Marcella and Luigi, Christian friends recounted, about the second week of December spent with the Buddhist monks in Ho Chi Minh City, Vietnam.

Our friends stressed how «the atmosphere we breathed in these days was one of great openness and new horizons.» And continued by saying: «it was like living in a fable, so to say.»

Some historical notes. The meeting of the monk, Phramaha Thongrattana Thavorn with the   spirituality of unity goes back to 1995. He had come to Rome to accompany his disciple, Somjit, who was living for a short period in the community of monks before his marriage, as is the tradition of young Buddhists. Phramaha Thongrattana, which means ‘fine gold,’ and on that occasion had met Chiara Lubich and was strongly impressed. She too was impressed by him and on his request gave him a new name: Ardent Light. From then on this monk did his best to live and announce forcefully and with enthusiasm the ideal of universal brotherhood,  the ideal of “mummy Chiara” (as he still calls her today).

At the funeral of Chiara Lubich, in 2008, Ardent Light declared his wish to tell the Buddhists «how much good Chiara did to my life as a monk. I feel that she continues to give me an interior drive and the strength to bring the ideal of fraternity to all. She no longer belongs to you Christians, but now, she and her ideal are the legacy of the entire humanity.» 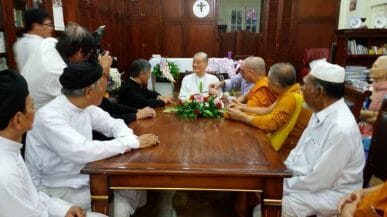 To go back to December 2016 in Ho Chi Min: «The first surprising fact – they said – was the bond of friendship that came about between Ardent Light and the Most Rev. Thich Thien Tam, monk in charge of the Pho Minh Pagoda, representative of both Theravada Buddhismo and of Mahayana in Vietnam. The latter is a personage who represents all aspects of Buddhism in Vietnam at international level. As a consequence of the trust and friendship generated between them, Rev. Thich Thien Tam had asked the competent authorities permission for the three monks to stay in the temple instead of a hotel as according to protocol. ».

Various interreligious (and not only) events were held,  such as their visit to two Christian communities, including lunch. The monks also took part in the Christmas feast, usually held for the local Christians, but they were welcomed with great joy by everyone.

Then followed the two visits to social projects brought ahead by Christians inspired by the spirituality of unity.

And then, the interreligious meeting at the Diocesan Pastoral Centre of  Ho Chi Minh City, attended by representatives of five religions. On that occasion, Ardent Light spoke of his friendship with the Pope at that time, John Paul II and  with Chiara Lubich. He explained about what she used to call “the art of loving”: a love that addresses everyone, and one that takes the initiative, that is able to be the other’s “neighbor,” that even goes to the point of loving and praying for one’s enemies… Marcella and Luigi recounted that «The eyes of some of the leaders present filled with tears – and to tell the truth, also those of our community.» The two hours of true dialogue concluded with the visit to the Archbishop emeritus, Cardinal J. Baptiste Phan Minh Man, who had so strongly worked for the creation of the interreligious dialogue at the Diocesan Pastoral Centre.

The last day was dedicated to the visit to some temples, and acting as guide was Fr. Bao Loc, priest in charge of interreligious dialogue for the Diocese of Ho Chi Minh City.

«Now new, unexpected horizons have opened before us, It is now up to us to continue the experience we have lived these days. Chiara’s legacy, of being always a family, is a reality that touches the hearts of everyone, when it is really lived.»