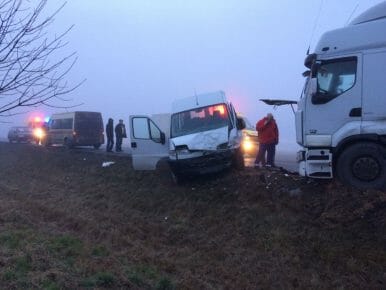 Accompanied by some of their assistants, thirteen Gen 3 were on their way to Focolare town in Krizevci, north Croatia. There was an atmosphere of serenity and great expectation during the trip. The theme of their congress would be challenging and demanding: Jesus Forsaken. The topic of suffering and pain is key to knowing how to live in a world of young people where so many seek well-being and false happiness.

It was a long drive through Hungary. Towards evening some of the boys dozed off. Suddenly, the sound of horns and, in the midst of thick fog, a large truck just before the frightening crash. Teia, Adelin, Delia, Eve, Bea, Iulian and the other boys were still alive, but their shock was great.

“The first car stopped just after the accident,” recounts one of the assistants. “It was an emergency vehicle. They had just finished their shift and were on their way back to the base. How could we not see God’s love in that? The police were excellent: they welcomed us in the largest room they had at police headquarters until another bus came to get us. They told us we were lucky to get out alive . . . then they brought us pizza and sweets.”

Once we got to hospital, the boys were divided between wards. Bea: “At that moment we felt lost, we didn’t understand Hungarian, we were frightened and alone. We didn’t know what was happening and didn’t know how to answer the doctors’ questions. Some of us were comepletely isolated from the others, and alone like Jesus Forsaken. It was like meeting him and living him.”

Eve: “Later on, people came and tranlsated for us. One focolarina from Romania was supposed to arrive in Hungary the previous day, but she had missed the bus. She was in a nearby city when she learned of the accident. The driver had proposed to the passengers not to make other stops and to take her directly to hospital to drop her off before helping us. She told us that understood why she had missed the bus the day before.” 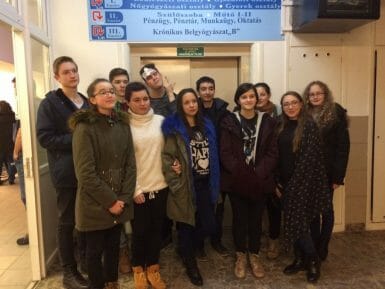 Rozi: “The doctors told us we had to stay in hospital for a few more examinations. I began to telelphone the boys’ parents. Many of them were 15 hours away from where we were. Moreover, the Gen3 were saying that they wanted to continue on to the congress. In the end we obtained permission to leave the hospital with the signature of their parents and without spending a cent.” Delia: “At that point we weren’t sure about continuing our journey, but we realized that such precious things always come with a cost.”

Some days later seven boys arrived at Mariapolis Faro. The experience of fear and pain, but also of intense unity among them, showed that the theme of the congress had already become something real for them. Iulian recounts: “We all just knew that whatever happens to us in life, it’s worth it to abandon ourselves totallyto God. Jesus Forsaken unites us in an incredible way! We were allowed to live because God has a plan for us: a divine adventure awaits us.”