Youth campaign: Changing our own square metre of space 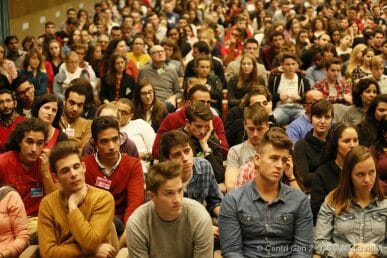 Jaime recounts: “Last year, I was given the opportunity to live for a whole year in one of the Focolare’s little towns, Mariapolis Lia, near Buenos Aires in Argentina. It was a very powerful and immersive experience, precisely because the law of that town is the Gospel, beginning with Jesus’s new commandment: ‘Love one another as I have loved you.’”

Upon his return to El Salvador, however, Jaime found himself catapulted into a climate of danger and violence: even in broad daylight, the roads are never safe. It’s even dangerous to take the bus or play football at the city park. “The situation had become so risky and dangerous,” Jaime continues, that I thought of leaving the country and moving abroad. At first, everybody at home agreed, but when I thought about it some more, I sensed that God asked me to stay and be bring a little light into the environment I lived in, near to my Gen friends who would have been alone in that situation if I left. What finally convinced me was some news about the young people from the Focolare in the Middle East, many of whom stayed in their country in situations that were certainly far worse than mine. We talked about it at home and all decided to stay in El Salvador and carry on entrusting ourselves to God.

When I told the Gen that I was staying, we got the idea of launching a campaign called: “Change your own m2 (square metre)” with the idea that if we were all involved in changing our own m2, the whole country could change.” 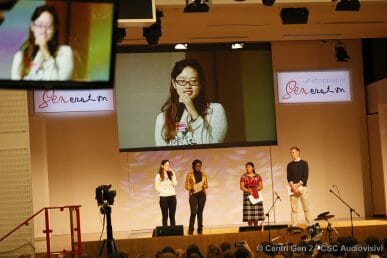 Tuong, a young Vietnamese teacher of 13 children, confided: “they each remind me of Jesus in his abandonment on the cross. Why do I say it like that? Two of them were rejected by the public school after they repeated the same class three times. Another two are handicapped and so the regular school didn’t accept them, and the school for the handicapped was too far away. The others have difficulty learning and their parents are separated and poor. All of them are experiencing a total absence of love, interest, sympathy, decorum; abandoned by their families and society.”

Tuong, what motivates you to go on teaching in such a class every day without any institutional assistance? It must not be easy…” “Actually it isn’t easy. One day I was trying to teach a student a certain letter in Vietnamese handwriting. I repeated it two or three times, but he wasn’t getting it and wasn’t able to pronounce it. I kept on trying, repeating it over and over again, but he couldn’t follow. I was about to become angry; I wanted to forget about it and go to another child. Just then his eyes filled with tears and I felt his plea for help. Then I thought: “If Jesus were the one here with this boy who is not understanding, He would never walk away and say: ‘I don’t care about you!’ So, I said: ‘Let’s try it again.’

One day I wasn’t feeling well. Then a girl said to the students: ‘Be good! Be silent! The teacher doesn’t feel well today!’ A little boy of 5 years came up with a cup of water for me, telling me to rest a bit. Wow! Their little gestures made me so happy and confirmed for me that the Gospel art of loving that I tried to live was becoming their lifestyle. Every day they do their best to learn, to live in love and to laugh. We’ve become a little family. Now they fill my days and my life has become colourful and filled with surprises.”