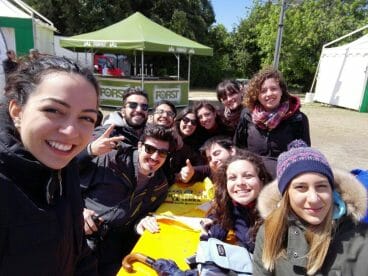 The Pincio Hill is a privileged terrace looking out over Rome, an observation point with a breathtaking view of the city skyline. But from 21 to 25 April a festive population stole the limelight to become an undisputed protagonist: the participants of “The Earth’s Village”, an event organised by Earth Day and the Focolare Movement within the setting of Villa Borghese, the capital’s green lung in the city centre. There were about130,000 visitors, families, children, youth, transiting citizens, but also ministers, key figures in the country’s economic and cultural life, cardinals and heads of various religions. It was a five-day event of institutional meetings, theme forums, courses, shows (also some stars of the musical world), a children’s village – within the context of the celebrations dedicated worldwide to the themes of ecology and respect for the environment – that contaminated also the strolling tourists, who thronged the place also due to the radiant sunlight and festive air.

Like last year, the Focolare Movement found in the Earth’s Village the ideal place to hold one of its most important gatherings, the Mariapolis: a temporary but insightful city, whose inhabitants renew their decision to live the Golden Rule which invites to “do to others what you would like others to do to you.” “For us, this rule is the throbbing heart of integral ecology,” explained the organisers of the event, which last year had received the unexpected visit of Pope Francis. The concept was also taken up by Cardinal Parolin, Vatican Secretary of State, during a mass celebrated in the Village: “the spark of interest for the things of God» is like a “spark of interest for our own selves, for the truest, deepest and most essential part of ourselves (…). A new attitude towards creation, the promotion of an integral ecology lived with joy and authenticity, following the example of St. Francis of Assisi.” 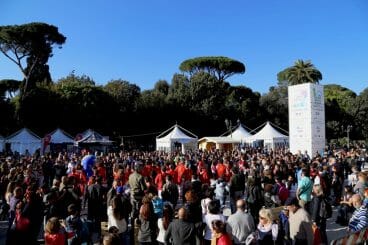 Among the many issues were discussed, a specific theme was Economy of Communion which is based on a market concept which surpasses the logic of savage capitalism and aims to make the economy an instrument for the humanization of relationships. The forums on Economy of the Village, The Community and the Enterprises, also saw the participation of the economist Stefano Zamagni. This educational phase proposed to the participants – citizens and economic and cultural operators – a space for the sharing of ideas, experiences and projects based on peace and economy, a dual term which today seems unachievable, given that behind every conflict, even behind the migration of thousands of refugees, lie enormous financial interests. And yet there are – and we saw them in the Village– economists and businessmen who have chosen to go against the current, to build enterprises that produce profits to be partly allocated to solve situations of poverty. These, in the current panorama, are concrete answers that bring hope.

Another central theme was intercultural and interreligious dialogue. There were moving testimonials from Fontem, offered by Maria Bencivenni and Martin Nkafu. In the tiny village, north-west of Cameroon, wedged in the equatorial rain forest, stands the hospital Mary Health of Africa, founded in 1964 by the Focolare. Due to the high infant mortality rate the king of the village had asked for help. In response, the Focolare had sent doctors, nurses, civil engineers and technicians, and thus initiated an extraordinary story of friendship and harmonious co-existence between Christians and the faithful of other traditional religions, Europeans and Africans. 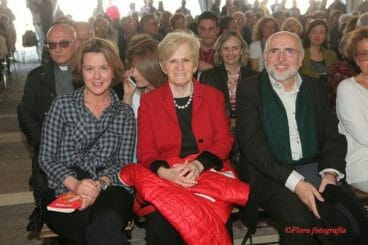 Livia Turco, in the past Health Minster and Beatrice Lorenzin, current Italian Health Minister, together with Vittorio Pelligra, professor of Economy, presented the book entitled Creative Fidelity. A Charism’s  Implementation Challenges by Jesús Morán, current Co-President of the Focolare Movement. An exchange of ideas on politics and charisms, two apparently distant fields, to the point that Chiara Lubich herself had defined politics the “love of loves,” the tool par excellence that can respond to the present needs. A creative fidelity: ideals and concreteness, novelties and faithfulness, a challenge of identity in every field. “Creative fidelity means not fearing to face challenges but at the same time signifies firmness in one’s own values and principles. In the globalization world, it is not easy to build equality and social justice – affirmed Turco. It is a great and very difficult challenge.”

A strong message of peace was launched on the last day. While the children were busy in the Playing together for peace workshop where they learned the differences between the Christian, Jewish, Muslim and Buddhist religions and the various places of worship, and built a mosaic with the words they had just learned, 7 women of 5 different faiths gave life to a panel called “Mothers of the Earth,” a round table of interreligious dialogue on the protection of the environment envisaged by the various religions.  “Women,” declared Franca Coen, president of the Jewish Beth Hillel community, “by nature know what it means to take care of and protect a seed so that it can develop into a healthy and harmonious being. Through dialogue between the various cultures and religious faiths, they can overcome the fear of the diverse and operate in synergy honouring the work of the Only Creator.”  Lilamaya Devi, of the Italian Hindu Union added: “According to our tradition, God rests on stones, breathes with the trees, sleeps with the animals and awakes in man. Religions have a very important function, that of reminding all of the deep union with the Earth.“  Mervat Kelli, a Syro-Orthodox Syrian said: “Nature is a shrine that teaches us how to create reciprocal relationships and live in profound harmony.”

The Earth’s Village closed shop but opened many hearts. The participants returned to immerse themselves again in the reality of the metropolis, with the firm intention to live in full communion with the surrounding environment and humanity.