Chiara Lubich: the dialogue of life

In this 500th anniversary year of the Reformation, there has been new drive towards Christian unity, from the historic meeting at Lund in Sweden to the Pope’s recent journey to Egypt. The Focolare Movement is increasing its commitment to what is known as the “dialogue of life” or “dialogue of the people”. This was reaffirmed in the Ottmaring Declaration (21.02.2017) and its outworking happens daily in the efforts of thousands of Christians throughout the world. The 59th “Ecumenical Week” ended recently at Castel Gandolfo (9th-13th May) with 700 participants from 69 countries and many parts of the world. 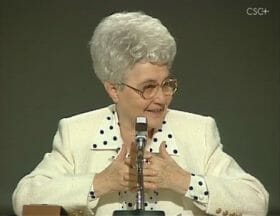 Chiara Lubich was asked about this kind of dialogue on the 4th April 1997 in the context of an ecumenical gathering and she replied spontaneously:

“Veronica, an Anglican focolarina from Great Britain asks what our specific contribution to the unification of the Churches could be. Our contribution should be seen in the context of the whole field of ecumenism. We know that there is the dialogue of charity, which is very important. It probably goes back to the times of Athenagoras, when Pope Paul went to visit Athenagoras and Athenagoras went to see Pope Paul. The dialogue of charity helps us to feel that we are brothers and sisters and that we help one another.

Then we pray together, which is a dialogue with God, a dialogue that goes through God. This too is very important especially during the Week of Prayer for Christian unity.

In addition, you all know that there is the theological dialogue, carried out by experts; that too is going ahead despite the fact that some people say ecumenism is not going ahead. Instead, it is going ahead.

We bring a new kind of dialogue. It is the dialogue of the people. It arose out of the spirituality [of unity] that we live in all the various Churches; there are members of 300 Churches who are in the Movement. This dialogue was generated by our spirituality because it is communitarian, it binds us to one another; it brings us together. If I love you and you love me, what is established between us? Jesus in the midst. But then Jesus unites us, as St Paul says, “What can separate us from the love of Christ?” (Rm. 8:35) Likewise, we say, “What will separate us?” Charity unites us. Christ himself unites us. No one can separate us if we go ahead with our spirituality. 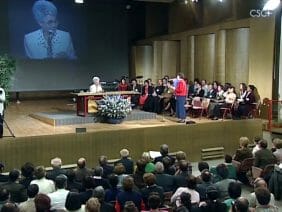 Therefore, by living this spirituality in the various Churches – Catholic, Anglican, Lutheran, Methodist, and so on – without even thinking about it, a people was born. It flowered from this spirituality, which generates a people.

Then what happened? What happened was that by living the spirituality together, by getting to know one another, by loving one another and growing in our mutual love, we discovered that we have things in common, that we are already one family, that we are already a Christian people. I have baptism, and so does Veronica, and so do you. I have the Old Testament and you do too. I have the New Testament and you have it too. Then we have the Councils and many other things in common.

If we have all this in common, why don’t we come together into one family and into one people? This is our characteristic contribution, which is essential. On the other hand, we are not the ones who bring it. It is a charism from heaven for our times, which are ecumenical times. It is the charism of unity, which has very much to do with ecumenism.”