Buddhists and Christians in dialogue, Part 2 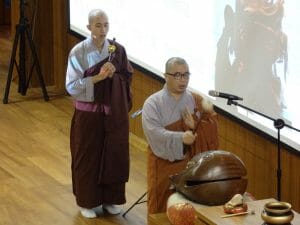 We reached Dharma Drum last night at dusk, where we were welcomed with exquisite kindness by young volunteers who helped us to get settled in our rooms. Then there was dinner and greetings. The symposium began the next morning. The conference hall and the entire building that holds the College of Liberal Arts is modern, built by a Japanese architect with elevated gardens to ensure a pleasant climate even during the hot rainy season, despite the humidity seeming to dominate all year long. The food they offer us is completely vegetarian and at a high culinary level, the expression of a delicate and attentive welcome that helps us feel at home. 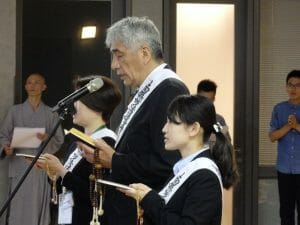 The opening ceremony begins at 10am. One of the members of the teaching faculty, Guohuei Shih, presents the professors there. Father Giuseppe Silvestrini, the official representative of the Vatican, greets the group, followed by Rita Moussalem and Roberto Catalano, co-directors of the Focolare’s Center for Interreligious Dialogue. There are about 70 of us from the U.S. Europe, Thailand, Korea, Japan, Philippines, China and Taiwan – both Buddhists from different traditions and Catholics. There are Theravada monks and laypeople from Thailand, Mahayana Buddhists from Japan who represent ancient schools such as Nichiren-Shu, Tendai-Shu and more recent movements such as the Rissho Kosei-kai. There is a lot of warmth between everyone present, including those who have brought their young followers. These are relationships that have been established through the years.

After the opening ceremony, there was a visit to the huge complex, which brought the various groups to different parts of Dharma Drum Mountain. Visiting the museum of Master Sheng Yen, the founder of Dharma Drum and reformer of Chan Buddhism, was particularly meaningful. In the afternoon we continued by touring the various halls, where images of the Buddha are venerated. There was an especially interesting lesson on how to venerate the Enlightened One. The Theravada monks humbly learned from the same tradition that the young monks do there at that university. 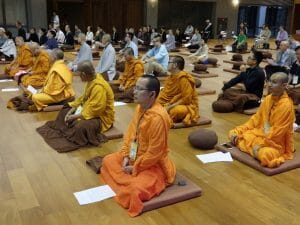 The most beautiful moment of the day is called “blessing time”: a long moment of prayer where each person prays according to their tradition – a moment of solemnness, respect and silence. In the hall dedicated to Buddha, where Christians that morning had celebrated mass, we spend an hour-and-a-half in a string of prayers. The Theravada monks begin and the Christians follow. Following them, there are the members of the Rissho Kosei-kai and Tendai-Shu, finishing with the Fo Gu Shan monks. Time seems to stop, and we feel greatly enriched in our hearts. It feels as if we are touching humanity’s infinite yearning and need to reach the absolute, especially faced with the immense problems of suffering and war.

As we leave we feel closer to each other, despite having had the part of the program where our differences surfaced the most. There is a spirit of communion and mutual respect that brings us closer during every part of the program.

In the days that follow, work continues so that we continually grow to know each other better with a rapport of friendship and true fraternity. We speak about suffering, with speeches on the personal and social dimension of suffering, presented by Christians, Theravada Buddhists from Thailand, Mahayana Buddhists, the Rissho Kosei-kai, Tendai-Shu and Won Buddhism from Korea. There are also workshops in parallel where the presenters discuss religion and psychology, dialogue and social action, experiences of dialogue in a variety of contexts, and mediation and dialogue, with a particular emphasis on Vipassana mediation. Three experts conclude the program with some reflections on the content that emerged during this work. 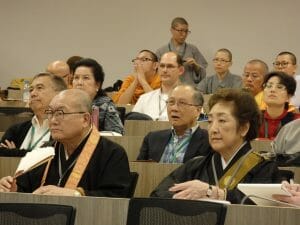 Beyond all this, what counts most is the atmosphere that was created. The head of the Dharma Institute of Liberal Arts, Rev. Huimin Bikshu, confides that this is the first meeting of its kind at the university. Besides those signed up as participants, there are also monks and nuns from the Dharma Drum Monastery and students of the college. The day is marked by a great spiritual and existential commitment. The dialogue allows us to emphasize what we have in common, despite there being great differences between the traditions. There are experiences that put up bridges of dialogue that bring hope, as Rev. Nisyoka from the Japanese Tendai-Shu affirms.

The conclusion of the work happens in the afternoon, organized by Providence University, an academic institution located at Thien Chu. There we talk about economics, the environment and interreligious dialogue.

The results from this week of common experience, reflection and spiritual friendship are difficult to convey. They are part of each of the participants’ souls. Perhaps what was said by a young Japanese monk, the abbot of a temple in his country, explains the depth of the experience best. “Rarely in life have I perceived the intimate presence of God-Buddha as I have in these days at our symposium in Taiwan… I have studied in Christian schools and I always thought that Christianity was a religion that happens in church (rites and religious services). During the symposium in Taiwan I understood that Christianity, instead, is the religion of the presence of God among people.”