A long journey in the Middle East 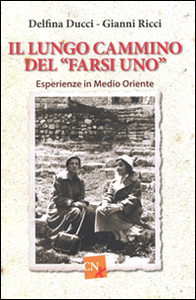 People travel for various reasons:  curiosity, thirst for knowledge, spirit of adventure, or in search of oneself. This was not so for Gianni Ricci who has indeed travelled far and wide and who is the co-author with Delfina Ducci, of an unedited book published by New City, The long journey tto “making yourself one.”  He “lived on the road” so to say, with aim of bringing solace to humanity’s infinite forms of suffering.

Born in Ripalta Cremasca, in northern Italy, in a simple but dignified family, he was raised with authentic Christian values. At the age of 20 he met Chiara Lubich’s spirituality of unity which revolutionised his idea of Christian life, so much so that he made the Focolare way of life his very own. In 1964 he left for Loppiano (Florence, Italy), the newly born town of the Movement, to which he faithfully dedicated twenty years of his life. After Loppiano, he accepted God’s will which led him first to Turkey, where he helped the newborn community to grow, then to the Lebanon, the Holy Land, Algiers, Jordan, Iraq, Egypt, Syria, Tunisia and Morocco.

“How many sudden changes I underwent! I am now in Turkey. There is nothing that can stop me from reaching sanctity. There is so much to do here,” he said. Gianni Ricci, the soulful globe trotter, took note of all he encountered, sometimes foregoing the difficulties, especially in relating with such diverse peoples. Though he saw the tragedy of the wars that caused deep wounds in the population, smothering hopes in a possible future stability and peace, he did not seek solutions or possible solutions in history books. He simply lived alongside the people he met, with a free and open heart towards an “infinite” humanity, that speaks the same language of the heart and of suffering.

«At the end of January 1986, with Aletta (focolarina of the early times) he travelled from Istanbul to Ankara and from there to Beirut, in Lebanon. The airport was half-destroyed by bombs! Lebanon was devastated by civil war (…). The check points were severe, the authorities suspected everyone and everything. Each check point was guarded by different factions. After eight days, Gianni left again for Istanbul. Along the 120 km that separated Beirut from the confines with Syria, they had to pass through 13 check points. At the first one they risked their lives. He stopped in front of a guardhouse where a soldier armed to his teeth asked to see his documents. He showed them and was able to leave. After a few steps a boy warned him to go back, making him note that the guard was pointing his gun on him and had not given the order to proceed. He didn’t press the trigger, thanks to Allah,” he said.

It is not a political narration, but solely a “humane” one.  The humanity he speaks about has no colour, language, passports, confines, laws or customs. In every place he was assigned to, Gianni undertook to nurture the relationships with the local Churches, Islam, the Hebrew world, with the aim of sustaining all the people he met, to defeat the fear and uncertainty of the future, the tensions provoked by war. A chain of memories in a perspective of unity – this is the “logic” that still drives Gianni, a stupefied observer of God’s works.

The citations were taken from  “The Long Journey to “making yourself one.” Experiences in the Middle East, Città Nuova, 2016.