Who are the Volunteers of God? 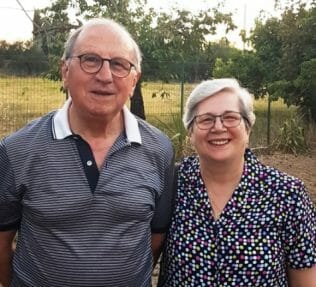 As a child, I loved to tune in to Vatican Radio in the evenings, which would broadcast news in various foreign languages. Naturally, I didn’t know any of those languages, but listening fascinated me. It seemed like my heart was expanding to all humanity, its people and their everyday lives.
It was during one of these evenings that I happened to hear Pope Pius XII invoke the name of God three times: “God, God, God!” That cry was imprinted on my conscience, even if, with the passing of time, it dimmed and was lost to memory. This was 1956.

Nine years later, in January 1963, I found myself in Turin, in the military. A bunkmate invited me to a conference, which, strangely enough, I didn’t ask anything about beforehand. As I requested permission from my superiors, I found myself asking as if my whole life depended on it. When they unexpectedly agreed, I left for Ala di Stura, a small mountain village in a marvelous corner of nature.
After having been welcomed by those present as if we had always known one another, it was there that I met Chiara Lubich – the founder of Focolare – and Igino Giordani, a co-founder. It made a strong impression on me to meet people from different cultures and religions. I also was able to meet during that time, since she was also hosted by Focolare, Assunta Roncalli, who was Pope John XXIII’s sister. He died that same year on June 3, 1963.

One morning Chiara spoke about a new calling that had started in the movement. It was only when she explained the year and circumstances of how it had begun that something urgently returned to mind: “God, God, God! God will help you, God will be your strength. May this indescribable name resound, the source of every right, justice and freedom, in parliaments, squares, houses and offices…” That was what the pope said in his radio message on November 10, 1956, when the revolution in Hungary was crushed.
“There was a society that erased the name of God, the reality of God, the providence of God, and the love of God from people’s hearts,” Chiara commented. “So there must be a society that is able to return him to his rightful place. Is it possible that the devil has his faithful followers, totalitarians, pseudo-martyrs for his cause, and God not have a small army of Christians that give everything to take back the world for him?
Chiara responded to that call of the pope with her intuition to gather women and men of all ages, nationalities, conditions, bound by a single link: that of universal fraternity. They would form an army of volunteers, the Volunteers of God, part of the Focolare Movement that today is present in 182 countries.

It is a modern, radical calling. Chiara Lubich gives it an additional fascinating touch when she describes it as the “attraction of modern times”:
“To achieve the highest contemplation while remaining mixed in the crowd, side by side with people… to shine embellishing light on everyone, and at the same time, share with our neighbors their shame, fame, bruises and brief joys.”
Igino Giordani compares it to “sanctity in worker’s clothing, spurred to bring God in parliament, in local councils, in hospitals, schools, offices, shops, studios, home, on the bocce field, but also in the world of art, communication, science, economics…” Because, he adds, “to bring God to these places means transforming them into abbeys, changing them into holy places where each day a special mass is celebrated!”
Fifty-four years have passed since that day I heard the call to enroll with the Volunteers of
God, who were born from a charism that, because it is genuine, can be measured by its tangible results in culture, society, economics, politics… so that the various areas of life do not remain mediocre, hopeless, divided and callous, but open to welcome the deep presence of God.