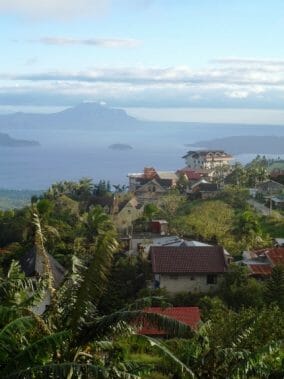 iving from Manila 60 km away, your first sensation as you come upon the region of Lake Taal on the island of Luzon is one of deep peace. Visitors are enchanted by such a unique sight: a lake whose waters have filled an ancient caldera with an island in its midst. That island, in turn, which is set in a more recent crater, has another much smaller lake. And at the centre of that small water mirror sits another island. It has that Russian doll effect with one lake contained inside the other. From the top of the volcano the view extends over green hills of fields and forests, pineapple, coffee and endless varieties of banana plantations and tropical flowers. 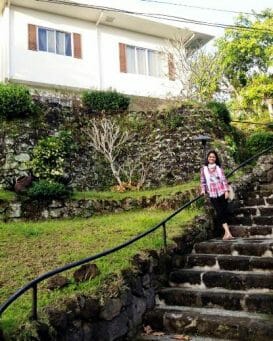 Ever since 1982 visitors have had the same sensation among the streets and buildings of Mariapolis Peace in Tagaytay, which was the first permanent Mariapolis in Asia. “I have a dream,” exclaimed Chiara Lubich that year, as she observed the hills of Tagaytay: “that precisely there, a Focolare town would rise where the Gospel would be lived out in a steady way in order to give a picture of what the world would be like if we all lived the Gospel. The presence of the Focolare in Tagaytay is, however, far farther in time. The Focolare’s presence in the Philippines goes back much further in time. Already in 1966, the first meetings of Focolare members were being held in Tagaytay. Taken by the beauty of the natural surroundings, those members had prayed that one day there would be a centre for gatherings of Focolare members in that place, a “home for all of them”. Thanks to a generous donation the following year, that dream began to come true and take shape in 1975. Then came the events and dream in 1982, with the coincidental invitation to the Focolare Movement by the Philippine Bishops Conference to build, right there in the vicinity of Tagaytay, a “school” for Asian priests. Ever since then the development has been unexpectedly surprising. In particular, among the ten constructions that have been erected, there is a school of dialogue with the Great Religions of Asia, geared particularly towards Muslims and Buddhists, but also Hindus and Shintoists. Every year Buddhist youths from a lay Japanese association converge on the property to experience the joy of living living life together. Recently, in May, 200 members of the Great Religions from 13 Asian countries attended the School of Oriental Religions (SOR). 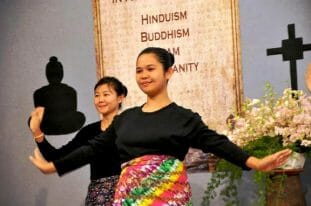 From its founding, Mariapolis Pace has assumed the profile of a centre for human development, becoming one of the venues of the Bukas Palad Foundation, a non-profit NGO, founded near Manila in 1983 to respond to the social and sanitary needs of the poorest sections of the population, especially in rural regions. Entire families live in precarious situations – often in one-room homes with dirt floors and no running water – with little or no access to medical care and scarce job opportunities. With their motto: “Freely we have received; freely we give,” Bukas Palad (with  open hands), has been on course for more than thirty years, improving the quality of life for thousands of people, not only medically, but also humanly and spiritualy, with an integrated and holistic approach focused on human health and development.

The workshops are currently a highlight of the Mariapolis, which adhere to the Economy of Communion Project, with the hospital volunteer activities in several public health structures, along with the lively testimony of workers in the media and several education projects.

The experiences of dialogue and sharing grow and multiply like the water in a lake that is replicated in other mirrors of water. But the reflections of Mariapolis Peace cannot be counted.