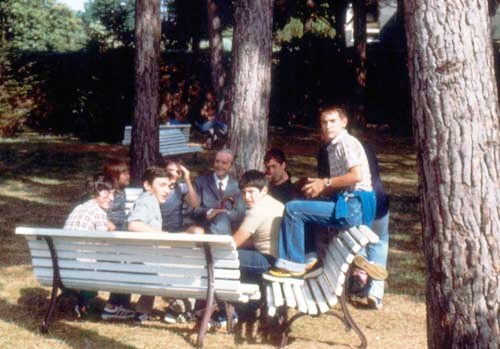 Igino Giordani treated young people with the love that emerges from the unity among generations. He was a brother to everyone, child or grown-up, because fraternity gathers us into one in the sight of the one Father:

“Jesus used very vivid words to express his close kinship with people. One can only imagine how he loved his mother and cousins, childhood friends and the confidants of his youth. Yet, one time, when their arrival was announced to him as he was teaching, he responded: ‘Who is my mother and who are my brothers and sisters?’ And extending his hand towards his disciples, he said: ‘There is my mother, there are my brothers: whoever does the will of my Father in heaven is my brother, sister and mother’ (see Mt 12:48-50). The meaning of his answer is obvious: whoever accepts God’s fatherhood, becomes brother, sister and mother of Jesus. Christianity relates us to Christ and, through Him, to God, with the first degree of kinship which is brotherhood” [Igino Giordani, Il messaggio sociale del  cristianesimo, 2001, p. 87].

Giordani compared the unity among generations to driving a car: youth is like the engine; old age like a prudent guide; both of them are required for arriving at the goal! From among his many letters, in 1979, a year before his death, there is one from a nine year old boy nicknamed Sandokan, who establishes a profound relationship with Igino, whom he calls ‘Little Grandpa with the heart of a Gen.”
“Dear Grandpa, ever since I heard that you were sick, I’ve been trying to pray more for you. Today Mom, Dad and I asked the priest to remember you at Mass. And I asked Jesus in my heart to help and be close to you in this moment. I remember that in one letter I told you I’d visit you at home, but I couldn’t – but the important thing is to have you in my heart and [for me to be] in yours.
When you’ve left us all, would you say hi to Jesus for us? You know, I’m sad that you’re going because I love you very much – but I’m glad that you’re going to be able to see Jesus who was everything for you. A big kiss from your Sandokan.”

“Dearest Sandokan, also known as Fernando, I remember you very well. You and I are sons of the same Father, Jesus. And I spend my days alongside you, without a care for the fact that we live far from one another. Dad told you well: I’m a grandpa with the heart of a Gen. So that means we’re the same age as brothers. Just remember me to your little brothers who are also Jesus’s sons; and love them as you love Mom and Dad and as you love Jesus… A kiss on the nose from your Grandpa.”

On the benches of the Mariapolis Centre, during the congresses that were offered to them by the Focolare Movement, the young people crowded around him, singing, dancing and discussing their lives with him. Each of them felt loved and made pacts with him to follow and live the Ideal of unity that Chiara Lubich had proposed. Giordani made a note of one of those joyful encounters in his diary:

“Even though I’m without voice today, they asked me to say something at the school for the Gen boys and girls – three  hundred people. I improvised, talking about different things, but focusing them on the mystery of love that is contained in the God-Brother-Me triad. There was an explosion of enthusiasm among the Gen boys and girls that was enhanced by songs and demonstrations of joy and unity among all” [from: Diario di fuoco, April 25, 1979].