The waiting room at the clinic was packed, and a number of doctors were taking in patients. There were only two free seats, one next to a stylishly dressed lady and the other near a man who smelled really bad – his clothes let on that his hygiene was questionable. Perhaps he was there taking shelter from the intense cold out on the street.

My first instinct was to sit next to the lady, since that smell was making me nauseous. All the same, I couldn’t help but think that if Jesus is present in every neighbor, surely he was also in that poor man. There was no excuse: my place was next to him, and he was the person to favor, precisely because he was unkempt, because he was someone “rejected.”
So I sat there, overcoming the natural disgust I felt, with people watching in surprise. The man immediately began to talk to me.
“What a nice sweater, what nice pants! How nice it would be to have clothes like that!”
I must admit, when he started to touch my pants to admire their quality and spoke even more enthusiastically about my clothes, I started to feel uncomfortable.
People were watching and expected me to react. At that point I gave him all my attention, treating him with dignity, without judging him, and seeing him as a brother. It wasn’t important whether or not what he was telling me about his life was plausible… I gathered that he needed someone who would listen, value and make him feel important. 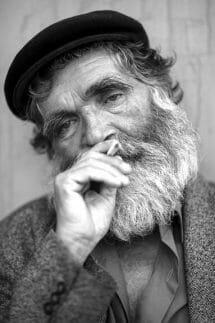 I tried not to mind that, as we talked, he was spraying saliva all over my clothes. I felt that this effort took me out of my comfortable life, and by doing so I’d be able to be compassionate toward that person.
I proposed we meet the next day for a coffee. My new friend was surprised and happy. The many people around us obviously heard all of this.
In the end, I heard my name called and went in for my medical visit. When I came out, “my” poor person was no longer there. By now the waiting room was almost empty, and only the stylish lady was left. She came up to me smiling.
“I hope I’m not disturbing,” she said, “but I followed your entire conversation with that man. It seemed to me that your patience was unlimited. I would have liked to do the same, but I was not brave enough. I heard every word, and you really seemed interested in that unusual conversation.
“When you went into the doctor, he got up and thanked all of us for our patience and told us: ‘He is a true friend. I had never seen him before, but he truly cared. For him, I am truly important!’
“Then he left. Tell me, why did you act that way with him?”

I told her that I am a Christian, and that I would like to love and serve every neighbor, especially those who suffer most, like a father would to his son.
The lady seemed surprised. She reflected a while and then told me, smiling, “If that is what living as a Christian means, perhaps I can too find myself once again in that faith I lost so long ago.”

The day after, I went to have coffee with my new friend. I brought him some clean clothes. When we said goodbye, he hugged me. Through the tears he said, “It has been some time since someone treated me like a human being who needs love and affection.”