From the Focolare Community in Mexico 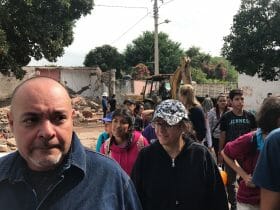 “Many of us stepped forward right away to help, along with the overwhelming majority of Mexican people, even though we were completely grasped by fear, as we tried to gather the requests for help that were coming in from every corner Mexico City and from the regions of the outback that were also hard hit. The strong sense of solidarity was everywhere. Hotels opened their doors to those who had lost homes. Doctors and psychologists offered services for free; families cooked and shared soup for everyone. Hundreds of volunteers worked hard without rest. They were all ordinary people who a few hours before were workers, sellers, housewives and employees.

Once again in the midst of an emergency Mexicans showed their true colours, never losing hope and spreading joy and enthusiasm even amidst the darkest moments. Streams of people helped out in simple ways, giving the appearance of a living giant rising from the dust. 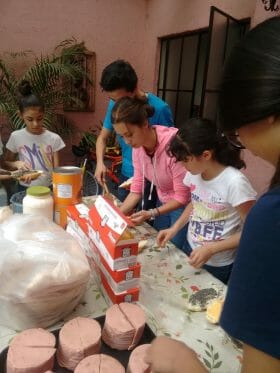 The disaster has also hit cities, such Puebla, Mexico City, Morelos, Chiapas and Oaxaca. Several members of our community offered their help, especially in Puebla and Morelos and other towns where assistance arrived more slowly. One family from Mexico City set up a collection centre in their own home, and then moved to Morelos to distribute foodstuffs and basic necessities to the neediest among the people. The young people from Mariapolis El Diamante went to Contla, located in the State of Pueblo, which was very hard hit by the earthquake. They removed rubble, loaded and delivered foodstuffs, and consoled those who had lost everything. To reach this particular community, which is located in a place that is hard to reach, they had to cross a river and pass over a deep ravine on a rope bridge they constructed on the spot. Meanwhile, the Economy of Communion group from Puebla organized an assistance project at Sant’Antonio Alponocan in another community of the region.
Finally, with the goal of coordinating the efforts, we created an emergency committee in Mexico City that launched a census of the damage and of the needs. 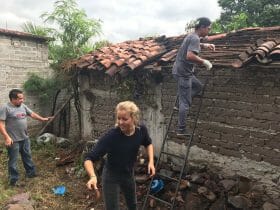 In those hard moments we always kept in mind the words that Our Lady of Guadalupe spoke to San Juan Diego on Mt Tepeyac, asking him to remember them always: ‘Put this in your heart, my small son: Don’t be afraid. Am I not here who am your Mother? Are you not in my shadow, under my protection? Am I not the source of your joy? Are you not in the folds of my mantle, in my embrace? Is there anything else you could need?’”

All of us in the Focolare have strengthened our commitment to work for love and brotherhood, for both the physical and spiritual reconstruction of our land.”