Appeals for peace in Northeast Asia 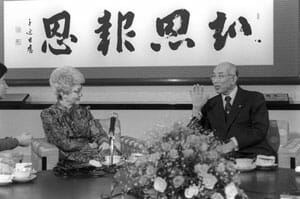 The crisis that has triggered around North Korea’s ballistic experiments and the reaction of the United States Administration have generated fears of the concrete possibility of a nuclear conflict.

The old Latin adage to keep the peace prepare war is senseless today.  The consequences of a conflict, furthermore with nuclear weapons, would have devastating consequences for the entire planet. Peace must be reached at all costs wherever it is strained and maintained, and wherever it has been achieved.

The members of the Focolare Movement feel a growing awareness of the role each of us can play as individuals and as a community, in this process. Besides prayers, they have undertaken different types of common endeavours, often inspired by the initiatives of other organisations or movements with which the Focolare collaborates.
In this sense we have to recall what the spiritual friendship between Chiara Lubich and Nikkyo Niwano, founder of the Japanese Buddhist movement, Rissho Kosei kai, has done to contribute to the cause of peace and to educate the new generations about this.

“Despite the difficulties, our cooperation will make us hope that we can work for peace together,” Niwano wrote to Chiara. On the occasion of the Focolare’s 50th anniversary, the founder of the Buddhist movement and his son, Nichico, repeated this common commitment to “make our human family more united.”

The Rissho Kosei kai also made itself heard over the last days with an official communication of the President-elect, Rev. Madame Kosho Niwano, to the world’s political and spiritual leaders, to renew the commitment of her movement and to ask them to leave no stone unturned in preserving peace in the Korean peninsula.

The appeal draws inspiration from the ideas of the founder, Niwano, who on the occasion of his speech before the United Nations Assembly in 1978 right in the midst of the Cold War, had addressed the leaders of the USA and USSR. “Instead of risking with arms, please take the risk of peace and disarmament,” he said. Niwano, like many religious leaders of his time, among which were Paul VI, John Paul II, and Chiara Lubich, had realised the responsibility of religions in contributing to the creation and maintenance of world peace.

The message Mme. Niwano also sent to  Maria Voce, President of the Focolare Movement, is that of a daughter of a people that had suffered in an indescribable manner in the last world conflict that had set the political leaders of the world before the danger of the effects of sanctions that could cause unpredictable reactions.

Also in the West there is a growing awareness of the danger of a nuclear escalation. On the occasion of the remembrance of the Day of Prayer for peace, established by John Paul II in 1986, the Committee for a Civilisation of Love prepared a meditation entitled Project for peace in the Korean region for the convention to be held at the convention in the Sacred Convent of Assisi (Italy) next 28 October.