No one is a stranger to me 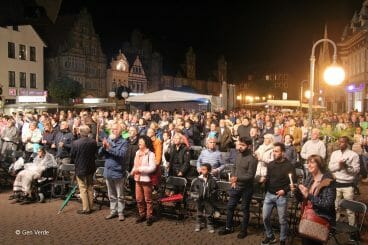 A month of dialogue, encounters and rediscovery of the “other’s” value.  In a country characterized by a strong multi-ethnic feature, rhythm and music exercised a unifying power. On 9 September, in the town of Stadthagen, in the Lower Saxony region, on the occasion of the celebrations for the Reformation Jubilee,  Gen Verde (22 members from 14 different countries) brought a note of internationality with the show, On the Other Side. A journey from one part of the planet to the other, recounted through personal experiences or that of entire populations, highlighted the wealth of diversity and the potential of those who find themselves “on the other side.”

On 15 September in Boppard, at the local Fazenda da Esperança, community that challenges drug addiction in the perspective of a rebirth, the La vita LIVE concert became the occasion for a personal encounter between the members of the band and the experiences of the youth. The opportunity to understand that each one can take a small but huge step to change something, and to discover each other as brothers. 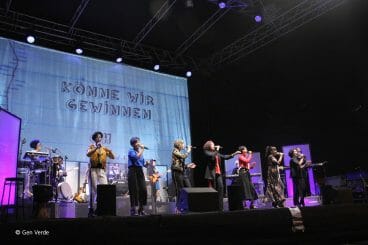 The following days, Gen Verde’s typical artistic features were expressed in a Start Now workshop: an intense boot camp that lasted five days, held in each of the three stopovers, working side by side with boys and girls.

During the creative stage, which comes about always in a new and unforeseeable way, the youths worked in teams to develop their own talents and potentials, co-protagonists of a fascinating experience based on mutual listening and transparency. After two days of intense work, supported by the group’s trust and respect, the youths performed with the band in the final show, in a crescendo of emotions.

There were three workshop-shows: in Dortmund, where the group worked with 170 boys and girls and in Duderstadt, with the students of three schools, among which a big group of immigrants, and lastly in Mannheim, with men and women living in a big refugee camp. 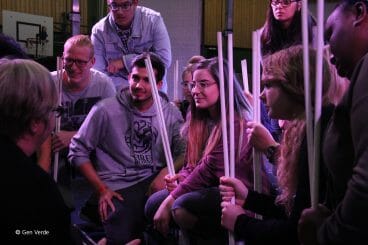 In every city, during the final show, the same miracle came about though with different characteristics: changes in life, atmosphere of deep fraternity, and the involvement even of those who were initially reluctant. “It is incredible what one can do in just two days!” exclaimed a still incredulous girl. And a young boy: “The errors did not paralyse us, but rather, we were encouraged to go on.” Particularly in Mannheim, Gen Verde met people who had suffered such heartbreaking pain, and had been subjected to barbarous treatment or had lost all their possessions. The group members recounted: “We went to visit them where they live, and they shared their stories with us. During the soiree, when we sang “Who will cry for you,” many relived moments of the tragedies they had undergone.” And the words “No one is a stranger to me” resounded like never before.