Geneva 1967: Chiara at the WCC with Philip Potter and Lukas Vischer

“The photograph was taken during a meeting Chiara Lubich had on her first visit to the World Council of the Churches in Geneva on 9 November 1967. It depicts a smiling Philip Potter, then Director of Missions and Evangelisation at WCC, later appointed as Secretary-General, Lukas Vischer, then Director of Faith and Order at WCC, talking animatedly, while Chiara Lubich looks on and listening attentively.

This visit was the result of a profound dialogue that was born between Chiara Lubich and the Swiss Reformed theologian, Lukas Vischer, during the various sessions of the Second Vatican Council in Rome (1962-1965). Mutual trust and friendship grew. Lukas Vischer saw in Jesus Forsaken, the central point of Chiara Lubich’s spirituality, a channel for ecumenical dialogue.

Their friendship was important and they valued it throughout their life. Coincidentally, they died only a few days apart (2008).

That initial meeting in 1967 led to further encounters and to a profound collaboration between the Focolare Movement and the World Council of Churches. A tangible factor was the presence at WCC over a great number of years of Luzia Wehrle, a Swiss member of the Focolare Movement, also known as Tersa, who was practically considered an ambassador. She was succeeded by Lut van Kersavond and Lurdes Guimaraes Teixeira. 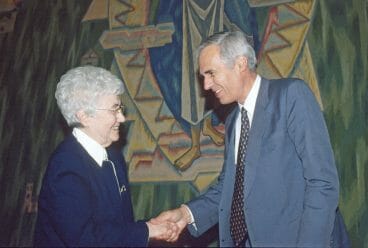 Other visits of Chiara Lubich to WCC followed in 1982 and 2002. Shortly after her election Maria Voce, as Focolare president, also visited Geneva. Collaboration and trust have increased. Joint events were promoted in Geneva: last year, the focus was on the values which have permeated Europe and which are characteristic of it.
For some time now, the students residing at the Focolare Movement’s centre in Montet (Switzerland) visit WCC as part of their course on ecumenism. Last year, besides the usual visit, there was also a visit to the Bossey Ecumenical Institute. This was an enriching experience for the students.

As I’m writing this, I look forward to welcoming the group of students visiting us on November 7th. A highlight will be the lesson given by Prof. Lawrence Iwuamadi, of the Pontifical Council for the Unity of Christians, who teaches Biblical theology at Bossey. The day will begin and end with prayer in the chapel, during which we will ask in faith the gift of unity that only Christ can give us.”